How much is John Belushi Worth?

John Belushi Net Worth: John Belushi was an American actor, comedian, and musician who had a net worth of $2 million dollars at the time of his death. That's the same as around $5 million in today's dollars after adjusting for inflation. Belushi died on March 5, 1982 at the age of 33.

He was born John Adam Belushi in January 24, 1949 in Chicago, Illinois. He was raised in Wheaton along with his two brothers and a sister. He studied at the Wheaton Central High School, where he would recognize his talent for comedy. As for his big break in the genre, in 1971 when he was hired by the National Lampoons Radio Hour as a writer.

Belushi became famous as part of the original cast of NBC's hit sketch comedy show Saturday Night Live (SNL), which he joined in 1975. His notorious and vivacious character and ease of comedy made him recognized as a great actor and comedian. As for his style, it was deemed very energetic and raunchy. Wanting to pursue a more solid acting career, Belushi left SNL in 1979 along with his friend and fellow actor Dan Aykroyd.

He made a few movies including, notably, "The Blues Brothers". The inspiration for this movie came from Belushi's love of blues and soul music.

Belushi started snorting cocaine in the middle 70s and he became addicted to it almost immediately. His addiction was a cause of friction between John and his high-school-sweetheart wife, Judy Jacklin whom he had married in 1976. In the beginning of 1982, Belushi was working on the screenplay for a movie that was going to be called "Noble Rot". Unfortunately this project was not concluded since he was found dead in his hotel room on March 5, 1982 due to an overdose of a mixture of cocaine and heroin. He was 33 years old. 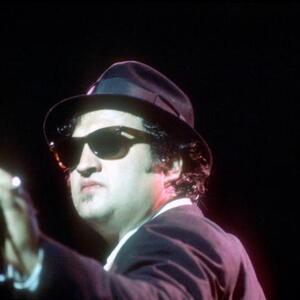