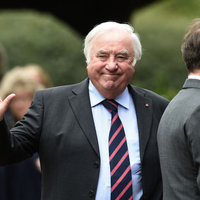 Jimmy Tarbuck Net Worth: Jimmy Tarbuck is an English comedian who has a net worth of $5 million. Jimmy Tarbuck was born in Liverpool, Lancashire, England, United Kingdom in February 1940. Jimmy was a schoolmate of John Lennon. He got his first television show with It's Tarbuck '65!. Tarbuck was the last original host of Sunday Night at the London Palladium and hosted many quiz shows including Full Swing, Winner Takes All, and Tarby's Frame Game. He also hosted such shows as Live from the Piccadilly, Live From Her Majesty's, and Live from the Palladium. He starred in the TV series Tarbuck's Luck and Tell Tarby in the early 1970s. Tarbuck also appeared on the TV series Tarbuck and All That!, Blankety Blank, After Ten with Tarbuck, and more. He also starred in the movies The Plank and Lola. Tarbuck was arrested in 2013 for an alleged sexual assault on a young boy in the 1970s but he was released without charge in March 2014.