Jeff Dunham net worth and salary: Jeff Dunham is an American ventriloquist and comedian who has a net worth of $140 million. Jeff Dunham is consistently one of the highest-paid comedians in the world, raking in anywhere from $15 – 30 million per year. Dunham has appeared on a number of television shows including "Late Show with David Letterman," "Comedy Central Presents," "The Tonight Show," and "Sonny With a Chance." Dunham is consistently one of the top-grossing standup acts in North America. Dunham has largely revived the art of ventriloquism. He's done more to promote the art form than anyone since Edgar Bergen.

Early Life: Jeff Dunham was born in Dallas, Texas on April 18, 1962. He was adopted at three months old by Howard and Joyce Dunham. He was raised in a devoutly Presbyterian home. He started experimenting with ventriloquism in 1970, when he was eight years old and received a Mortimer Snerd dummy for Christmas. The next day, Dunham checked a how-to book on ventriloquism out of the library and the rest is history. By the time he was in the fourth grade, Dunham wanted to not only be a professional ventriloquist, he wanted to be the best one ever. He practiced in front of the mirror for hours, studied the routines of ventriloquist Edgar Bergan, and poured over a how-to record on the subject.

In sixth grade, Dunham began attending the annual international ventriloquists' convention in Fort Mitchell, Kentucky called the Vent Haven ConVENTion.  Since that time, Dunham has only missed one ConVENTion, in 1977. Dunham began performing in front of audiences as a teenager at school, church, and at his job at the amusement park Six Flags. He made his television debut in 1976. Dunham did commercials for car dealerships in Dallas while still in high school. He graduated from high school in 1980 and was voted Most Likely to Succeed. He set a goal of booking an appearance on "The Tonight Show Starring Johnny Carson" within 10 years.

Dunham enrolled at Baylor University to study communications. At the same time, he was flying around the country on weekends doing 100 private shows a year. By his junior year in college in 1983-84, he was making $70,000 a year.

Career:  In 1985 he landed a part in a Broadway variety show that featured Mickey Rooney and Ann Miller. This show would prove to be a big break for the young comedian. In the late 1980s, he moved to Los Angeles. In 1988 he appeared on The Tonight Show with Johnny Carson, achieving a lifelong goal. Throughout the 90s, Jeff was a moderately successful touring comedian. It was his 2003 Comedy Central special that turned Jeff into a superstar. He went on to appear in television shows such as Blue Collar TV, Good Morning America, Hollywood Squares and others, including his own one-hour specials, Jeff Dunham: Arguing With Myself, (2006) Jeff Dunham: Spark of Insanity (2007) and Jeff Dunham's Very Special Christmas Special (2008). His Christmas special brought in the highest ratings in the history of Comedy Central.

In 2009, Dunham cut a deal with Comedy Central, giving him a chance to air his fourth special, do a tour of sixty cities, gain a partnership in consumer products, and an order for the "Jeff Dunham Show" television series (which premiered on October 22, 2009), as well as DVDs. Despite having the most-watched premiere in Comedy Central history, and higher average ratings than other shows on that network initially, "The Jeff Dunham" show was canceled after only one season due to poor reviews, low ratings, and higher production costs than other Comedy Central shows.

Dunham has written two books. "Dear Walter" came out in 2003 and was written with Walter Cummings. His autobiography, "All By My Selves: Walter, Peanut, Achmed and Me," was published in 2010.

Personal Life: Dunham met his first wife, Paige Brown, at the Comedy Corner in West Palm Beach in 1992. They got married in 1994 and he adopted Paige's one-and-a-half-year-old daughter Bree. They went on to have two daughters Ashlyn (1995) and Kenna (1997). Dunham was on the road performing constantly and this put a strain on their marriage. In November 2008 he filed for divorce.

In mid-2009, Dunham began dating Audrey Murdick, a nutritionist, personal trainer, and bodybuilding competitor. They got engaged on Christmas Day 2011 and married on October 12, 2012. In October 2015, she gave birth to their twin sons James Jeffrey and Jack Steven. 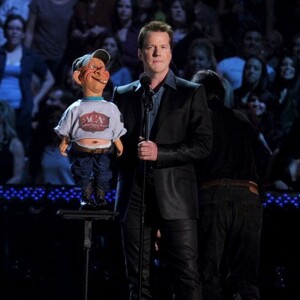