What is Jason Sudeikis' Net Worth and Salary?

Jason Sudeikis is an American actor and comedian who has a net worth of $25 million. Jason first appeared on the scene in the 1990s, and since then he has taken roles in a wide range of film and television projects. Outside of his acting roles, Sudeikis is an accomplished screenwriter and producer. He is also an established voice actor. Jason Sudeikis has been nominated for a number of awards, including a People's Choice Award, an MTV Movie Award, a Teen Choice Award, and a Nickelodeon Kids' Choice Award.

Daniel Jason Sudeikis was born on September 18th of 1975 in Fairfax, Virginia. Born with anosmia, Jason lacks a sense of smell. Both of his parents were involved in the travel agent business at the time of his birth. His mother's younger brother is actor George Wendt, who is known for playing the role of Norm Peterson on the series "Cheers." Jason was raised in Overland Park alongside his two sisters. After graduating from high school, Jason attended Fort Scott Community College on a basketball scholarship but dropped out to pursue a career in entertainment.

Sudeikis began his career by joining several improv comedy groups. A big break came when he was hired as a sketch writer for "Saturday Night Live" in 2003. By 2005, he had become a featured player on the show and eventually starting portraying recurring characters, such as George W. Bush, Joe Biden, and Mitt Romney. During this period, he booked a recurring role on "30 Rock."

In 2007, Sudeikis kicked off his film career with three roles in different movies. These films were "Watching the Detectives," "The Ten," and "Meet Bill." Next year, he followed up with roles in movies like "What Happens in Vegas" and "The Rocker." That year, he also booked a voice acting role in the video game "Grand Theft Auto IV." After joining the cast of the web-series "The Line," Jason booked roles in two 2010 films: "The Bounty Hunter" and "Going the Distance." From 2009 to 2013, he voiced numerous characters on the animated series "The Cleveland Show."

Jason Sudeikis was elevated to a new level of fame when he he joined the cast of "Horrible Bosses" in 2011. He was one of the three central characters, along with Charlie Day (his fellow cast-member from "It's Always Sunny in Philadelphia") and Jason Bateman. He then appeared in six episodes of "Eastbound & Down" and booked a role in the film "We're the Millers." In 2010, he hosted "WWE Raw" at the Staples Center in Los Angeles. In 2011, Jason hosted the 2011 MTV Movie Awards at the Gibson Amphitheater in Los Angeles. 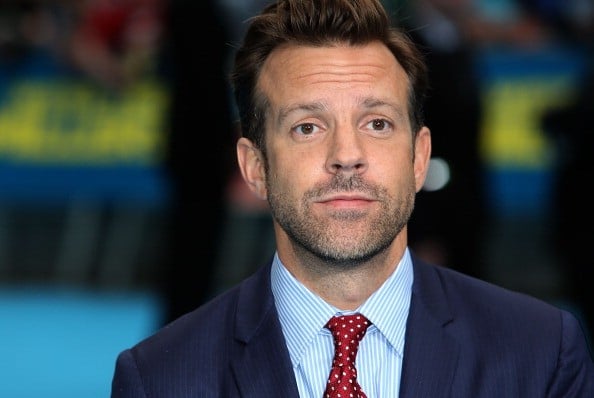 In 2014, he reprised his prior role in "Horrible Bosses 2." Next year, he starred in the films "Sleeping with Other People" and "Tumbledown." In 2016, he voiced the character of Red in "The Angry Birds Movie" before appearing alongside Anne Hathaway in "Colossal." That year, he also appeared in four other films: "Masterminds," "Race," "The Book of Love," and "Mother's Day." To wrap up 2016, Jason played John Keating in the off-Broadway production of "Dead Poets Society." He is also known for his appearances in "Derren Brown: Secret" and "Derren Brown Underground."

In 2017, Sudeikis acted as executive producer for the series "Detroiters" before starring in films such as "Kodachrome," "Permission," "Next Gen," and "Downsizing." He also starred in the 2019 film "Driven" and reprised his earlier voice role in "The Angry Birds Movie 2." In 2019, he appeared as a Speeder Bike trooper in the series "The Mandalorian." That year, Apple TV+ approved a television series centered around Jason's earlier character, the football coach Ted Lasso. He also signed on to the project as an executive producer for the project.

Outside of these appearances, Jason has appeared in films like "Semi-Pro," "Drinking Buddies," and "Booksmart." He has also booked roles in TV series like "Childrens Hospital," "Portlandia," "Robot Chicken," and "SpongeBob SquarePants."

For the first and second seasons of "Ted Lasso" Jason earned $400,000 per episode. There were 10 episodes in each season so that worked out to $8 million in earnings for the first and second seasons. In September 2021 it was revealed that Jason will earn $1 million per episode of the third season. Assuming the third season is also 10 episodes, that will be $10 million.

Jason Sudeikis is an accomplished basketball player who has played at the 2011 and 2016 NBA All-Star Celebrity games.

Sudeikis has joined forces with other celebrities from the Kansas City area to create The Big Slick, a charity event that raises money for the Cancer Center at Children's Mercy Hospital. Over the years, Sudeikis and the other organizers have managed to raise over $6 million for the Mercy Hospital Cancer Center.

Jason also hosted a benefit concert at the Uptown Theater in Kansas City called Thundergong! The event raised money for the charity organization Steps of Faith, which helps provide prosthetic arms and legs for those in need.

In 2012, Sudeikis provided voice acting services for a number of commercials for Applebee's restaurants. As part of a promotional campaign for NBC's coverage of the English Premier League, Sudeikis played the role of Ted Lasso, an American football coach who begins coaching Tottenham FC.

Jason's first marriage was to screenwriter Kay Cannon in 2004. After five years of marriage, they separated in 2008 and their divorce was finalized by 2010. The following year, Sudeikis started dating actress Olivia Wilde. In 2013, they became engaged. They never technically married. They have two children together. Jason and Olivia announced in November 2020 that they had split several months prior.

In 2019, Jason Sudeikis and Olivia Wilde purchased a Spanish-style property in the Silver Lake neighborhood of Los Angeles for $3.5 million. The house was originally constructed in 1928, and it first hit the market with a price tag of $3.35 million. The interior has been drastically updated, and it boasts 2,800 square feet of living space.