Jan Hooks Net Worth: Jan Hooks was an American comedienne and actress who had a net worth of $1.5 million dollars. Jan Hooks was born on April 23, 1957 in Decatur, Georgia. She was probably best known for her work on NBC's Saturday Night Live (SNL), where she was a regular player from 1986 to 1991 and continued making cameo appearances until 1994.

Her subsequent work has included a regular role on the final two seasons of Designing Women and a number of roles in film and television. She began her career as a member of the Los Angeles-based comedy troupe The Groundlings and in an Atlanta nightclub act called The Wits End Players. Between 1978–1979, Hooks appeared in Tush on Ted Turner's television station WTCG, which eventually became TBS. She gained notice in the early '80s on the HBO comedy series Not Necessarily the News. Hooks also had guest comedienne appearances on Comedy Break with Mack and Jamie in the mid-'80s. Hooks left SNL in 1991 after being asked by Linda Bloodworth-Thomason to replace Jean Smart on the CBS sitcom Designing Women. She has since made appearances in several movies and had a recurring role as the trashy Vicki Dubcek on 3rd Rock from the Sun, earning Hooks an Emmy Award nomination. She guest-starred on two cartoons for the FOX Network: The Simpsons, as Apu's new wife, Manjula and Futurama, in the episode Bendless Love, as the voice of a female robot named Angleyne. She also had a memorable role in Pee-wee's Big Adventure as a know-it-all tour guide at the Alamo. Hooks made a cameo appearance in the 1992 movie Batman Returns as Jen, the Penguin's image consultant during his campaign to become Mayor of Gotham City. In 2010 she was a guest star on 30 Rock, playing Jenna's mom, Verna. Tragically, Jan Hooks died on October 9, 2014 at the age of 57 after reportedly suffering from a serious illness. 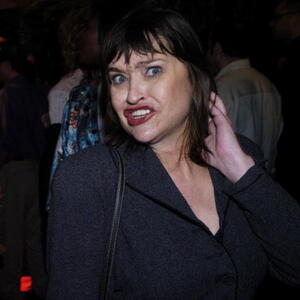