How much is Jackie Gleason Worth?

Jackie Gleason Net Worth: Jackie Gleason was an American comedian and musician who had a net worth of $10 million dollars. He is probably best remembered as Ralph Kramden, the character which he played in "The Honeymooners". Widely known by his stage name Jackie Gleason, he was born John Herbert Gleason in Brooklyn on February 26, 1916. His Irish mother, Mae, was an underpass change-booth assistant and his Irish-American father Herbert Walton Gleason, also known as Herb, was an insurance auditor. Jackie Gleason was one of two children, however, his brother, Clemence died. Clemence was aged of 14 when he lost his battle to spinal meningitis. After the death of Clemence, Herbert Gleason left his family. The only thing Gleason really remembers about his father is that he had a neat handwriting. Gleason never graduated from High-School. Instead, he became interested in performing, especially after he got cast in a school play. He left school and started working at a theater as master of ceremonies. He earned 4 US Dollars a night. In 1949, Gleason got his first big break. He landed the role of a blunt, but very nice aircraft worker named Chester A. Riley, in "The Life of Riley". This was the first television version of the eponymous radio production. Some of his most distinguished screen roles include Minnesota Fats in the drama "The Hustler" and Buford T. Justice in the Smokey and the Bandit series. From the 1950s to the 1960s, he made a break from acting as he pursued a music career. Thus, he lent his name to a string of best-selling "mood music" albums with jazz overtones for Capitol Records. Next, he got back to acting and remained active until 1986. Jackie Gleason died of colon cancer on June 24, 1987. 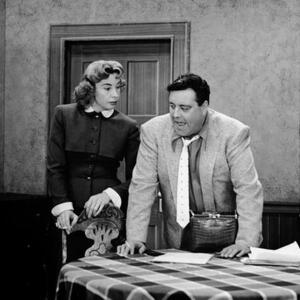