Jack McBrayer net worth and salary: Jack McBrayer is an American actor and comedian who has a net worth of $6 million. Jack McBrayer first became famous by appearing on Late Night with Conan O'Brien. McBrayer received an Emmy nomination in 2009 for his performance as Kenneth Parcell on the television series 30 Rock.

Jack was born on May 27, 1973 in Macon, Georgia, at 15 he moved to Conyers, Georgia where he studied theater at the University of Evansville. From 1995 to 2002 he had a job at Second City and iO, where he met actress and creator of 30 Rock Tina Fey. He was featured in Mariah Carey's 2008 music video for her single "Touch My Body" he also appeared in the film Cats & Dogs: The Revenge of Kitty Galore which was released in 2010. McBrayer plays the recurring role of the character Irving on the third season of Phineas and Ferb he is also an avid fan of the show. He has been a regular on the hit children's television show "Yo, Gabba Gabba! In the skit "Knock Knock Joke of the Day" He played the part of a waiter at the Bluth family's country club, a minor recurring role on Arrested Development. Some of his latest voice only roles include the hit TV shows The Simpsons as "Peach Guy" and Bob's Burger as "Marbles" both appearances were in 2010. He also starred in the 2012 movie Wreck It Ralph, voicing the character known as "Fix-It Felix". 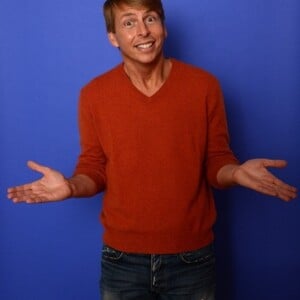