Iliza Shlesinger net worth: Iliza Shlesinger is an American comedian who has a net worth of $7 million dollars. Iliza Shlesinger first became well-known after winning the 2008 season of NBC's "Last Comic Standing". She has released a number of specials on Netflix. Her own Netflix sketch show debuted in April 2020.

She was born in 1983 in Dallas, Texas. In school she participated in her school's Improv Team. She also performed with ComedySportz in Dallas. At Emerson College she majored in film and was a member of Jimmy's Traveling All Stars, her school's comedy sketch group. After graduating she moved to LA to become a stand-up comic. She became a member of the Whiteboy Comedy group and was brought on stage at The Improv in Hollywood, CA. Iliza Shlesinger won the So You Think You're Funny contest on Myspace in 2007. She was also featured as the Myspace Girl of the Week on the G4 network. She has appeared on television shows including New York Stand Up Show, Byron Allen's Comics Unleashed, Forbes Celebrity 100, America's Next Top Producer, and History of a Joke. She had her own show on GOTV's mobile network, and has written for Heavy.com. An early notable accomplishment was becoming the first female as well as youngest winner of NBC's Last Comic Standing, in 2008. She was the host of a reality show titled Excused from 2011 to 2013. She starred in a film titled Paradise in 2013 along with Russell Brand and Holly Hunter.

Iliza has released a number of specials of Netflix, starting with 2013's "War Paint". 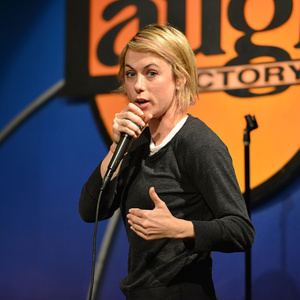