Ilana Glazer Net Worth: Ilana Glazer is an American comedian, actress, and writer who has a net worth of $6 million. Glazer is best known for co-starring in and co-creating the Comedy Central television series "Broad City" (2014–2019) with Abbi Jacobson. Ilana also co-created and starred in the 2016 Comedy Central miniseries "Time Traveling Bong," and her first stand-up comedy special, "The Planet Is Burning," began streaming on Amazon Prime in January 2020. Though she is mostly known for her work on television, Glazer has appeared in the films "The Night Before" (2015) and "Rough Night" (2017) as well.

Early Life: Ilana Glazer was born Ilana Rose Glazer on April 12, 1987, in St. James, New York. She grew up in a Jewish household with parents Sandi and Larry (who both work in finance and insurance) and brother Eliot. Eliot is an actor and writer who played Ilana's brother on "Broad City" and has written for the TV series "New Girl" and "Younger." Glazer attended Smithtown High School, then majored in psychology at New York University, graduating in 2009.

Career: In 2006, Ilana started taking classes at the famed Upright Citizens Brigade Theatre and performed improv and stand-up comedy in New York City for many years. In 2009, Glazer shot the "Broad City" web series, with Abbi Jacobson, who she met at the UCB Theatre. The web series debuted on YouTube in February 2010 and got positive reviews from "Entertainment Weekly" and other major publications. After UCB co-founder Amy Poehler saw the web series, she appeared in the series finale and met with the duo to help them shop a pilot script around. Poehler agreed to serve a producer on a potential "Broad City" TV series, and FX was the first network to show interest, purchasing a script commitment. However, FX didn't approve the script, so Ilana and Abbi pitched their pilot to Comedy Central. The network bought the script from FX, and "Broad City" premiered on Comedy Central on January 22, 2014. The series aired 50 episodes over five seasons and featured guest stars such as Hillary Clinton and Ru Paul. "Broad City" was named the ninth best show of the decade by "Vanity Fair" and the 28th best by "Rolling Stone."

Personal Life: After college, comedian Rachel Bloom, future star and co-creator of The CW series "Crazy Ex-Girlfriend," was Ilana's roommate in Brooklyn. Glazer married computational biologist David Rooklin at City Hall in New York City on February 25, 2017. Ilana identifies as queer and has said that working on "Broad City" helped her learn about herself and her sexuality.

Awards and Nominations: In 2010, "Broad City" won a Judge's Award from the Iron Mule Short Comedy Screening Series. Glazer has earned four Emmy nominations for the Comedy Central web series "Hack Into Broad City": Outstanding Short Form Comedy or Drama Series in 2016, 2017, and 2019 and Outstanding Actress in a Short Form Comedy or Drama Series in 2019. She has also received two Critics Choice Television Award nominations for Best Actress in a Comedy Series (2014 and 2015) for "Broad City," and the show also earned her an MTV Movie + TV Award nomination for Best Comedic Performance (shared with Jacobson) in 2017 and a Writers Guild of America Award nomination for Comedy Series in 2016. 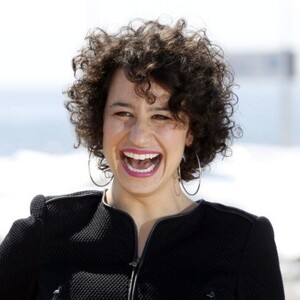