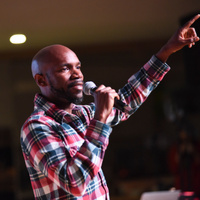 Ian Edwards net worth: Ian Edwards is an English American stand-up comedian, actor, writer, and producer who has a net worth of $800 thousand. He was born in England and then raised in Jamaica until his family moved to New York when he was 17. Edwards wrote for the TV series Chocolate News in 2008 and In the Flow with Affion Crockett in 2011. He served as a consulting producer for the TV series Dogg After Dark in 2009 and Russell Simmons Presents: Stand-Up at the El Rey in 2010. Edwards has starred in the films Man of the Century, Dealin' with Idiots, and Tangerine. As a comedian he has appeared on the TV series Def Comedy Jam: Primetime, The Late Late Show with Craig Ferguson, The Bad Boys of Comedy, Late Night with Conan O'Brien, Comics Unleashed, and Conan.