Groucho Marx net worth: Groucho Marx was an American comedian, writer, and actor who had a net worth equal to $12 million at the time of his death after adjusting for inflation. Groucho Marx was born in New York City, New York in October 1890 and passed away in August 1977. He is considered to be one of the greatest comedians of all time and made more than a dozen feature films along with the Marx Brothers who were his siblings.

Groucho Marx hosted the television game show You Bet Your Life. From 1950 to 1961. He starred in several films as part of the Marx Brothers including Humor Risk, The Cocoanuts, Animal Crackers, The House That Shadows Built, Monkey Business, Horse Feathers, Duck Soup, A Night at the Opera, A Day at the Races, Room Service, At the Circus, Go West, The Big Store, A Night in Casablanca, Love Happy, The Story of Mankind, and more. He also authored several books. Marx won an Honorary Academy Award as well as a Primetime Emmy Award and received two stars on the Hollywood Walk of Fame for Television and Radio. Groucho Marx passed away on August 19, 1977 at 86 years old. At the time of his death, Groucho Marx's estate was worth $2.8 million, roughly $12 million in today's dollars. After his death, several family members fought bitterly over the estate. In the end, not much was left after several years of legal battles. 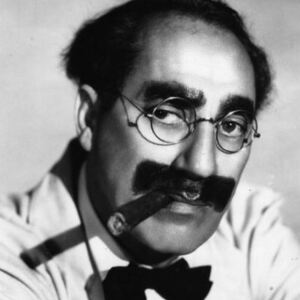