Graham Norton Net Worth and Salary: Graham Norton is an Irish comedian who has a net worth of $40 million dollars.  His current chat show, "The Graham Norton Show", is hosted on Friday nights on BBC One. He works on several radio shows and is a five-time BAFTA TV Award winner for Best Entertainment Performance. Norton also routinely hosts The British Academy Television Awards.

Early Life: Born in Dublin, Ireland, on April 4, 1963, as Graham William Walker, Graham Norton studied at but did not graduate from University College, Cork. He would later receive an honorary doctorate from the school.  He moved to London and worked as a waiter while attending the Central School of Speech and Drama. When he joined the actors' union Equity, Graham chose Norton as his stage name as there was already a prominent actor named Graham Walker.

TV Career: Norton made the press in 1992 when he portrayed a tea-towel clad Mother Teresa in a comedy drag act in the Edinburgh Festival Fringe. His first appearances in broadcasting were in the UK, where he had a spot as a regular comedian and panelist on the BBC Radio 4 show "Loose Ends" in the early '90s. Norton began to gain public attention when he filled in for a late-night TV talk show host and hosted a quiz show, "Bring Me the Head of Light Entertainment". He also appeared in the Channel 4 series "Father Ted." He got his chat shows, "So Graham Norton" and "V Graham Norton", on Channel 4, and eventually moved to the United States in 2004 to continue his career. His program, "The Graham Norton Effect", was launched on Comedy Central later that year, until the comedian moved over to the BBC to host several programs, including "Graham Norton's Bigger Picture" and "How Do You Solve A Problem Like Maria?" He also hosted the Saturday night reality TV series "Strictly Dance Fever" on BBC One. During this time, Norton also hosted various other shows for the BBC including "When Will I Be Famous?" "The One and Only," and "Totally Saturday."

Norton's chat show, "The Graham Norton Show," began airing in February 2007 on BBC Two. The format is similar to his previous Channel 4 shows. In October 2009, the show moved to BBC One in a new one-hour format. It airs on Friday nights with re-runs a few days later. It is unique in that Norton will often interview 3-4 celebrities at once, with all participants sitting on a couch and usually sipping on something boozy of their choice. In May 2010, Graham stood in for Chris Evans' breakfast show on BBC Radio 2 and later that month it was confirmed that he would be replacing Jon Ross's Saturday morning slot on the same station. In December 2011, a new panel show launched, "Would You Rather…" with Graham Norton" on BBC America. Recorded in New York, it is one of BBC America's earliest efforts at producing original programming, and is also the first panel game the channel has shown, either of British or American origin. In February 2019, it was announced that Norton would be a judge on the UK version of RuPaul's Drag Race alongside Alan Carr on a rotating basis.

Other Ventures: Norton was involved in an ad campaign for the UK National Lottery as an animated unicorn, the stooge to a character based on Lady Luck he also advertised McVitie's biscuits. In 2007, Norton featured in Girls Aloud and Sugababes Comic Relief video for the single "Walk This Way." In January 2009, Norton made his West End debut in "La Cage Aux Folles" at the Playhouse Theatre. In March 2013, Norton won the Guinness World Record for "Most Questions Asked on a TV Chat Show" on Comic Relief's Big Chat. In 2014, Norton publicly backed "Hacked Off" and its campaign toward UK press self-regulation by "safeguarding the press from political interference while also giving vital protection to the vulnerable."

Norton wrote an advice column in The Daily Telegraph newspaper from 2006 to 2018. In October 2010, his columns were made into a book entitled "Ask Graham." In October 2014, Norton released his memoir, "The Life and Loves of a He-Devil." In 2016, Norton published his first novel "Holding", about a murder in a rural Irish community. Norton won the Popular Fiction Book of the Year Award for "Holding" in the Bord Gais Energy Irish Book Awards in 2016. In October 2020, Norton announced via Twitter that he had been cast as the voice of Moonwind in the upcoming Pixar animated feature "Soul" starring Jamie Foxx and Tina Fey.

Personal Life: The openly gay entertainer split from his partner, Trevor Patterson, in 2013 after three years together. He split with his subsequent partner, Andrew Smith, in 2015.  Norton has stated that his ex-boyfriends often resented the role they had to play in the public eye as his partner.

In 1989, when he was a young drama student, Norton was mugged and stabbed by a group of male attackers on the street in London. He lost half of his blood and almost did not survive the attack. He said an elderly couple found him and said they saved his life after they called an ambulance for him. Norton didn't think the attack was a homophobic hate crime as he was walking alone at the time. Norton was hospitalized for two and a half weeks before eventually recovering from the attack.

Norton resides in Wapping, London, and owns a holiday home in County Cork, Ireland. He also owns an apartment in New York City. He adopted his dogs, Bailey and Madge, from the UK Charity Dogs Trust. In January 2012, Norton's London home was broken into. His Lexus was stolen and he pleaded for the return of his car during his BBC Radio 2 show the next day. 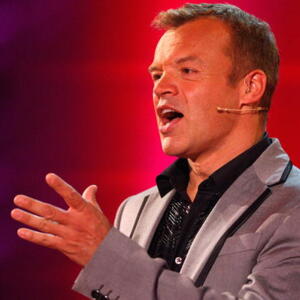