In 2002, "TV Guide" ranked "The Larry Sanders Show" #38 on their list of the greatest shows of all time, and in 2008, it came in at #28 on "Entertainment Weekly" magazine's list of the best shows of the previous 25 years. In 2015, "Entertainment Weekly" published a "25 Best TV Shows in 25 Years" list and named "The Larry Sanders Show" the best series of 1993. Tragically, Garry died in 2016 at the age of 66, a brilliant comedic mind gone too soon. In 2018, he was honored in the documentary "The Zen Diaries of Garry Shandling," which was directed by Judd Apatow, one of many comedians Shandling mentored.

Early Life: Garry Shandling was born Garry Emmanuel Shandling on November 29, 1949, in Chicago, Illinois. He grew up in a Jewish household in Tucson, Arizona, with mother Muriel (a pet store owner), father Irving (a print shop owner), and older brother Barry. The Shandling family relocated to Tucson because Barry needed treatment for cystic fibrosis; sadly, when Garry was 10 years old, he lost his brother to the disease. No one explained to Shandling what had happened to Barry, and his parents didn't allow him to attend the funeral. Garry studied at Palo Verde High School, and after graduation, he enrolled at the University of Arizona. He initially majored in electrical engineering, but he ended up earning a degree in marketing, and later spent a year studying creative writing. When Shandling was 19, he attended a George Carlin performance at a Phoenix comedy club and showed Carlin some jokes he had written. George complimented Shandling's work and encouraged him to keep writing.

Career: Garry moved to Los Angeles in 1973 and found a job at an advertising agency. He sold a script for "Sanford and Son" and wrote four episodes of the show in the mid-1970s. Shandling later wrote for "Welcome Back, Kotter" (1976) and "The Harvey Korman Show" (1978). He performed stand-up comedy for the first time in 1978, making his debut at the Comedy Store in West Hollywood. After Shandling had been performing stand-up on the road for a few years, he caught the attention of a talent scout who worked for "The Tonight Show Starring Johnny Carson" and booked him on a 1981 episode of the show. Garry served as a guest-host several times until 1987, when he gave it up to focus on his own show. Showtime aired the comedy special "Garry Shandling: Alone in Vegas" in 1984, and in 1991, HBO aired "Garry Shandling: Stand-Up." In 1985, Shandling created "It's Garry Shandling's Show" with Alan Zweibel, and the Showtime series aired 72 episodes (15 of them written by Garry) over four seasons. He would star on his own show again in 1992 when he launched "The Larry Sanders Show" on HBO. The series ran for 89 episodes over six seasons, and Shandling directed the 1998 episodes "As My Career Lay Dying," "Adolf Hankler," and "I Buried Sid."

Personal Life: Garry lived with former fiancée, Linda Doucett, who played Darlene on "The Larry Sanders Show," from 1987 to 1994. After they split up, he fired Doucett from the series, and she sued Shandling and Brillstein Entertainment Partners for wrongful termination and sexual discrimination. In 1997, the lawsuit was settled out of court for $1 million. Garry was a Buddhist and spent his free time meditating and playing basketball, regularly inviting his comedian friends over to play on Sunday afternoons. Shandling owned the TSB (Tough Strong Bold) 44 boxing gym in Santa Monica, California, and boxed several times per week.

Death and Estate: Garry suffered from a potentially fatal condition called hyperparathyroidism, which can elevate the risk of a heart attack, and he had surgery related to the condition at Ronald Reagan UCLA Medical Center. On March 24, 2016, he collapsed at his Brentwood home, and sadly, the beloved comedian passed away after paramedics rushed him to Providence Saint John's Health Center. Shandling's autopsy revealed that he died of pulmonary thrombosis after a blood clot traveled to his lungs from his leg. Shortly after his death, it was reported that Garry had planned a Buddhist funeral in which he would "be ordained as a Buddhist monk by having his head symbolically shaven by another monk." The weekend after his death, more than 30 of Shandling's friends, including Judd Apatow, Sarah Silverman, Jeffrey Tambor, and Kevin Nealon, gathered at his home for "one last Sunday game at Garry's," and a month later, hundreds attended his memorial service at L.A.'s Wilshire Ebell Theatre.

Real Estate: In 1990, Shandling bought a 6,100 square foot home in the Brentwood area of Los Angeles. He put the 5-bedroom, 8-bathroom house on the market for $13.5 million the day before his sudden death, and it sold for $10.65 million five months later. 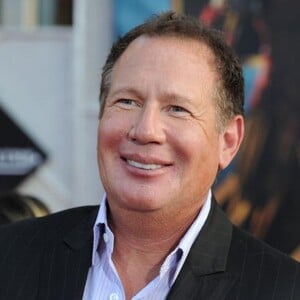