Gallagher Net Worth: Gallagher is an American comedian who has a net worth of $200 thousand. Gallagher was a popular "prop" comedian in the 1970s and 1980s, perhaps most famous for destroying water melons during his live acts.

He was born Leo Anthony Gallagher, Jr., in Fort Bragg, North Carolina on July 24, 1946. Gallagher earned his chemical engineering degree from the University of South Florida. He also graduated with a minor in English Literature, which he credits as coming in handy when crafting his comedy skits. He worked as a road manager for Jim Stafford after graduation and began performing. Johnny Carson refused to have him on "The Tonight Show" because of his prop comedy style, but the producers eventually invited Gallagher on when Carson wasn't hosting. Overall, he has appeared in more than a dozen Showtime comedy specials that are routinely showed on Comedy Central.

He's best known for his "Sledge-O-Matic" sketch involving a large wooden mallet and, typically, watermelons. The sketch led to a feud with his younger brother, who wanted permission to use the routine and began promoting his own acts in a way that led some folks to believe they were attending an original Gallagher performance. Gallagher was named to Comedy Central's Top 100 Stand-Up Comedians of All-Time, but disputed his ranking of 100. He ran for Governor of California in a recall election in 2003, finishing 16th. In 2014, he embarked on his farewell tour due to his declining health after suffering three heart attacks.

[The photo of Gallagher used on this page was taken by U.S. Navy photo by Mass Communication Specialist 3rd Class Christopher K. Hwang and was licensed through Creative Commons via Wikimedia] 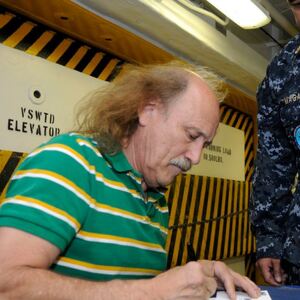