Fred Gwynne Net Worth: Fred Gwynne was an American actor who had a net worth of $2 million. Fred Gwynne was born in New York City, New York in July 1926 and passed away in July 1993. Some of Gwynne's best known roles including starring in the sitcom Car 52, Where Are You?, and as Herman Munster in The Munsters. He was also known for starring in the films Pet Sematary, The Cotton Club, and My Cousin Vinny. Fred graduated from Harvard University and served in the U.S. Navy during World War II. His first screen role came in the TV series The Philco-Goodyear Television Playhouse in 1952. From 1961 to 1963 Gwynne starred as Officer Francis Muldoon in the TV series Car 54, Where Are You?. From 1964 to 1966 he starred as Herman Munster in the series The Munsters. His last role came as Judge Chamberlain Haller in the 1992 movie My Cousin Vinny. Gwynne was nominated for TV Land Awards in 2004 for Favorite Crimestopper Duo for Car 54, Where Are You? and in 2005 for Most Uninsurable Driver for The Munsters. Fred Gwynne passed away on July 2, 1993 at 66 years old from pancreatic cancer. 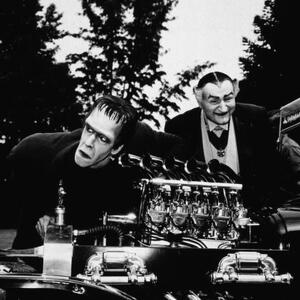