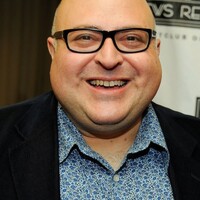 Frank DeCaro net worth: Frank DeCaro is an American writer, comedian, journalist, and talk radio host who has a net worth of $3 million. Frank DeCaro was born in New York City, New York in November 1962. He has authored the books The Dead Celebrity Cookbook: A Resurrection of Recipes from More Than 145 Stars of Stage and Screen, The Dead Celebrity Cookbook Presents Christmas in Tinseltown: Celebrity Recipes and Hollywood Memories from Six Feet Under the Mistletoe, Unmistakably Mackie: The Fashion and Fantasy of Bob Mackie, and A Boy Named Phyllis: A Suburban Memoir. He graduated from Northwestern University's Medill School of Journalism and worked as a media critic writer for the Detroit News and the Detroit Free Press. DeCaro did movie reviews for The Daily Show and has hosted a daily radio show since 2004 for SIRIUS XM OutQ 109. As an actor he starred as the title role in the 1984 film Junior. DeCaro is a lifelong gay rights activist.