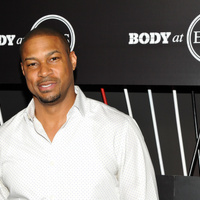 Finesse Mitchell net worth: Finesse Mitchell is an American actor, author, and stand-up comedian who has a net worth of $1 million dollars. Finesse Mitchell, also known as Alfred Langston Mitchell, was born in Atlanta, Georgia, and graduated from the University of Miami. He began appearing on television, performing stand-up, in the late 90s. He performed on such shows as "BET's Comic View", "The Late Late Show with Craig Kilborne", and "Late Night with Conan O'Brien". In 2003, he joined the cast of "Saturday Night Live", and remained with the show until 2006. Since then, he has appeared in such projects as "Who's Your Caddy", "The Comebacks", "Mad Money", "Loving the Bad Man", "Pretend Time", "Meet the Browns", and "Single Ladies". He is most widely recognized for his role on the hit Disney series, "A.N.T. Farm". He is a current member of Shaquille O'Neal's All Star Comedy Jam tour. He is next slated to appear in the film, "There's Always Woodstock".