Dick Gregory Net Worth: Dick Gregory was an American civil rights activist and a comedian who had a net worth of $8 million. Dick Gregory was born in St. Louis, Missouri in October of 1932. He was a poor student, but managed to excel at running. His teachers at Sumner High School helped him and he eventually managed to go to Southern Illinois University on a track scholarship.

He went ahead to set school records for running for the half, and one mile runs. In 1954, his college education was interrupted when he was asked to join the army. It was during his time in the army that he got started as a comedian, going on to win several Army talent shows. After two years in the army, Dick went back to school, but later dropped out. He felt that the university was more interested in him running, as opposed to his academics. Following his newborn passion for comedy, Dick became part of a new generation of black comedians, including the likes of Bill Cosby. Most of his comedic material was racial issues and current events. Dick would work for the post office during the day, and perform at all-black nightclubs at night However, he soon got jobs performing for all-white audiences and was once spotted by Hugh Hefner performing some material. Hugh was impressed to the point of hiring Dick to work at the Chicago Playboy Club. His stints in politics saw him attempt to run for presidency in 1968, but he lost. He became an outspoken critic as well as feminist. Gregory was married to wife, Lillian, and had 10 children with her. Dick Gregory died on August 19, 2017 at the age of 84. 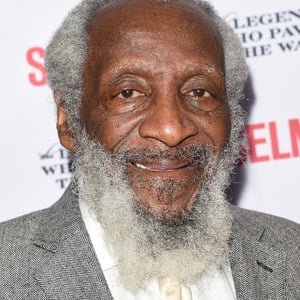