What is Dennis Miller's Net Worth?

Dennis Miller is an American stand-up comedian, talk show host, actor, commentator and personality who has a net worth of $100 million. Dennis Miller is known for his work as a cast member on "Saturday Night Live" from 1985 to 1991, and for his subsequent talk shows on HBO, CNBC, and the radio channel Westwood One. Additionally, Miller has become notorious for his neoconservative views and his appearances on Fox News.

Dennis Miller was born on November 3, 1953 in Pittsburgh, Pennsylvania and was raised in the suburb of Castle Shannon. He is of Scottish ancestry, and has four siblings. Miller's parents divorced when he was young, leaving him to be raised by his dietitian mother Norma. He went to Saint Anne School, where he played basketball and served as the manager of the Catholic Youth Organization basketball team. As a teen, Miller attended Keystone Oaks High School, and established a reputation for being funny. In his senior year, he worked on the school newspaper and served on the student council. For his higher education, Miller enrolled at Point Park University, and graduated in 1976 with a degree in journalism.

Miller began his comedy career performing at open-mic nights in Pittsburgh, Castle Shannon, and Oakland. During this time, he lived without a car or much money. Eventually, he saved enough money to move to New York City, where he lived in a tiny bunker-like apartment. Miller earned recognition in the Big Apple after a joke he submitted to a Playboy magazine contest ended up tying for second place, winning him $500. He gained even greater attention performing in the New York Laff-Off Contest, drawing the interest of talent agents.

In the early 80s, Miller returned to Pittsburgh and made a transition to television. He appeared on KDKA-TV, and starred in comedy segments on the syndicated program "Evening Magazine." In 1983, Miller became the host of the Saturday-morning newsmagazine show "Punchline." After befriending Jay Leno and Jerry Seinfeld at Pittsburgh comedy clubs, Miller relocated to Los Angeles.

In LA, Miller made his debut at the Improv. He also competed on "Star Search," ultimately losing to fellow comedian Sinbad. In 1985, Miller made his first appearance on "Late Night with David Letterman."

Miller had his breakthrough in 1985, when he was noticed by Lorne Michaels at the Comedy Store in Los Angeles. He subsequently auditioned for "Saturday Night Live," and won a spot in the cast. On the show, Miller succeeded Christopher Guest as the new Weekend Update anchor. He became known for his snarky delivery, primped hair, and high-pitched laugh. In addition to his work on Weekend Update, Miller appeared in various sketches, and played the recurring characters of Koko and Steve. Additionally, he did celebrity impressions of George Harrison, Nathaniel Crosby, and Gary Hart. Miller left "Saturday Night Live" in 1991. 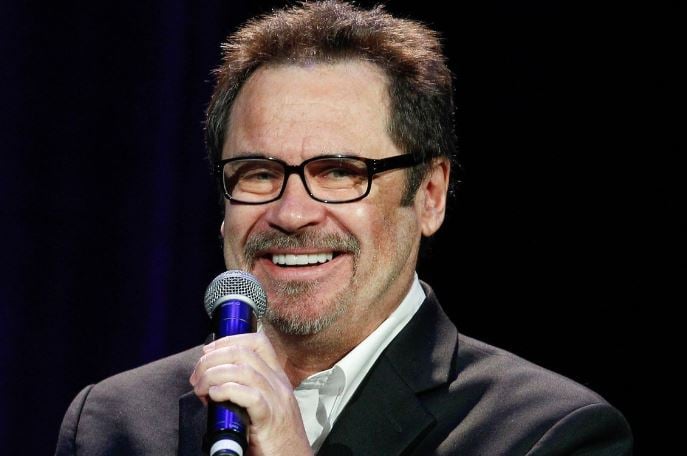 Following his departure from "Saturday Night Live," Miller hosted a number of talk shows and did sports and news commentary. His first show, "The Dennis Miller Show," ran for seven months in 1992. He had better success hosting "Dennis Miller Live" on HBO, which ran for 215 episodes from 1994 to 2002. During this time, in 2000, he became a color commentator on ABC's "Monday Night Football," for which many viewers criticized his overly comedic commentary.

Over the years, Miller has made appearances on numerous television programs. He has appeared on "Boston Public," "The Norm Show," "Hannity & Colmes," "SportsCenter," and various late night talk shows, and hosted the MTV Video Music Awards in 1995 and 1996. Miller also briefly hosted the game shows "Grand Slam" and "Amne$ia." Additionally, he has appeared in a variety of films, including "Madhouse," "Disclosure," "The Net," "Bordello of Blood," "Murder at 1600," "Joe Dirt," and "The Campaign."

Dennis has been married to Canadian former model Carolyn Espley since 1988. They have two sons.

Dennis' younger brother Jimmy Miller is one of the most successful entertainment managers in Hollywood. Jimmy is a founding partner in Gold/Miller which represents comedic actors such as Judd Apatow, Sacha Baron Cohen, Jim Carrey and Will Ferrell.

Despite being considered a staunch liberal during his early career, Miller began moved to neoconservatism in the 2000s. He was one of the few celebrities to support George W. Bush and the war in Iraq, and has made numerous xenophobic and anti-scientific comments as a commentator on Fox News. In the 2012 Republican primary, Miller endorsed Herman Cain, and in the 2016 presidential election, supported the Orange One.

Dennis and Carolyn are secretly quite the property moguls with several extremely impressive real estate assets in their portfolio, primarily in the Santa Barbara area.

In 1993 Dennis and his wife paid an undisclosed amount for a nearly 4-acre estate in Montecito, California. They listed the home for sale in 2010 for $17.5 million. They ultimately sold the property in 2015 for $11.5 million.

They still own the property across the street from the previously mentioned mansion. They tried to sell this house in 2013 for $5 million but did not find a buyer and still own the home today.

For over a decade they owned a different 4+ acre in Montecito. They sold this property in November 2020 for a mind-numbing $49 million. It was soon revealed that the buyers of the home were none other than Ellen DeGeneres and Portia de Rossi.

In 2003 they paid $11.75 million for a beachfront home a few minutes south of Montecito in the tiny celebrity enclave of Carpinteria. They listed this home for sale in 2015 for $22.5 million, ultimately accepting $19 million in March, 2015. The buyer at the time was Lynda.com founder Lynda Weinman. Lynda sold this house in 2020 for just under $24 million.