How much is Dave Attell Worth?

Early Life: Dave Attell was born David Attell on January 18, 1965, in Queens, New York. He grew up in a Jewish household in Rockville Centre, New York, and his younger sister, Monica, is a musician who has served as Dave's opening act. Attell attended New York University, earning a communications degree in 1987, and began trying out his comedy at open mic-nights after graduating.

Stand-Up Comedy Career: Dave worked his first stand-up gig at Governor's in Levittown and has said that he "totally bombed." He made his TV debut on VH1's "Stand-Up Spotlight" in 1988, and he performed on "The Late Show with David Letterman" for the first time in 1993. Lorne Michaels saw Attell's performance and hired him to be a writer on "Saturday Night Live." Dave wrote on 20 episodes of the series and appeared on seven episodes. Attell was then featured on the "HBO Comedy Showcase" (1995) and the "1995 Young Comedians Special," and he got his own "HBO Comedy Half-Hour" special in 1996. Dave later appeared on "Pulp Comics" (1997), "Mr. Vegas All-Night Party Starring Drew Carey" (1997), "Just for Laughs" (1997), and "The N.Y. Friars Club Roast of Drew Carey" (1998). In 2001, he was nominated for an American Comedy Award for Funniest Male Stand-Up Comic, and he released his first comedy album, "Skanks for the Memories…," in 2003. In 2006, Attell released the DVD "Hey, Your Mouth's Not Pregnant!," and the following year, HBO aired "Captain Miserable," his first one-hour special. In 2014, his one-hour special "Road Work" aired on Comedy Central. Dave toured with Jeff Ross in 2018, and they filmed a three-part documentary for Netflix entitled "Bumping Mics with Jeff Ross & Dave Attell."

Television Career: A squiggly, animated version of Dave appeared on "Dr. Katz, Professional Therapist" in 1995 and 1997, and he was a commentator on "The Daily Show with Jon Stewart" from 1999 to 2002.  He hosted "Insomniac with Dave Attell" from 2001 to 2004 and visited cities such as Atlanta, Honolulu, Las Vegas, Myrtle Beach, and Philadelphia. The series aired 45 episodes, and the DVDs "The Best of Insomniac Uncensored (Vol. 1)" and "The Best of Insomniac Uncensored (Vol. 2)" were released in 2003. Attell began appearing on "Tough Crowd with Colin Quinn" in 2002, and in 2005, he appeared on two episodes of "Arrested Development," playing himself, who in turn was playing David Cross' Tobias Funke on the show-within-a-show "Scandalmakers." In 2008, Dave hosted "The Gong Show with Dave Attell," which ran for eight episodes on Comedy Central, and he hosted "Dave's Old Porn" on Showtime from 2011 to 2012. He hosted the stand-up comedy showcase "Comedy Underground with Dave Attell" in 2014, and he played himself on three episodes of TV Land's "The Jim Gaffigan Show" in 2015 and 2016 and three episodes of HBO's "Crashing" from 2017 to 2019.

Personal Life: Dave dated Sarah Silverman in the late 1980s, and he is good friends with Amy Schumer, who named her son Gene Attell Fischer in honor of him. She later changed Gene's middle name to David after she realized that Gene Attell sounds like "genital." 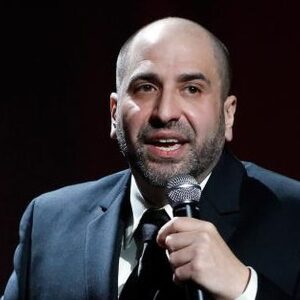