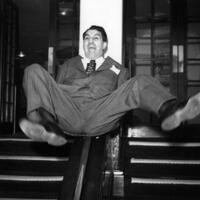 Danny Thomas net worth: Danny Thomas was an American comedian, signer, actor, and producer who had a net worth equal to $20 million at the time of his death (after adjusting for inflation). Danny Thomas was born in Deerfield, Michigan in January 1912 and passed away in February 1991. His career ended up spanning five decades and he is best known for creating and starring in the television sitcom Make Room for Daddy which was also known as The Danny Thomas Show as Danny Williams from 1953 to 1964. Thomas starred in films including The Unfinished Dance, Big City, Call me Mister, The Jazz Singer, I'll See You in My Dreams, and more. Danny Thomas also founded the St. Jude's Children's Research Hospital. He won a Primetime Emmy Award in 1995 for Best Actor Starring in a Regular Series for Make Room for Daddy and received a posthumous Bob Hope Humanitarian Award in 2004. In 1960 he received a star on the Hollywood Walk of Fame at 6901 Hollywood Blvd. Danny Thomas passed away on February 6, 1991 at 79 years old. His daughter, actress Marlo Thomas, has been the longtime spokeswoman of St. Jude's and has helped the organization raised hundreds of millions of dollars. In 2017, a Beverly Hills property that at onetime was owned by Danny Thomas hit the market for $135 million.