The Three Stooges featured Curly with his older brothers Moe Howard and Shemp Howard along with actor Larry Fine. Curly was the most popular of the Stooges and was known for his high pitched voice and vocal expressions and his physical comedy and athleticism. Howard was untrained as an actor and borrow his "woob woob" phrase from comedian Hugh Herbert. Howard had over 120 acting credits from 1933 to 1947. He starred in the films Turn Back the Clock, Broadway to Hollywood, Meet the Baron, Dancing Lady, Myrt and Marge, Fugitive Lovers, Hollywood Party, The Captain Hates the Sea, Start Cheering, Time Out for Rhythm, My Sister Eileen, Rockin' in the Rockies, Swing Parade of 1946, and Stop! Look! and Laugh!. Howard was awarded a star on the Hollywood Walk of Fame with Larry and Moe in 1983 at 1560 Vine Street.  He suffered from a severe stroke and a second massive stroke left him partially paralyzed and in a wheelchair. Curly Howard passed away on January 18, 1952 at 48 years old. 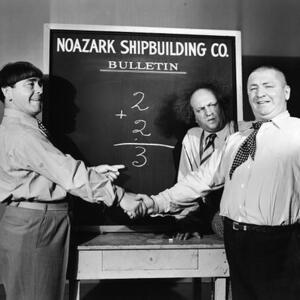