How much is Chris Farley Worth?

Early Life: Christopher Crosby Farley was born on February 15, 1964 in Madison, Wisconsin and grew up in Maple Bluff. His father, Thomas Farley Sr., owned an oil company and his mother Mary Anne was a housewife. He had four siblings: Tom Jr., Kevin, John, and Barbara. His cousin Jim is the Chief Executive Officer at Ford Motor Company. Many of his summers were spent as a camper and a counselor at Red Arrow Camp near Minocqua, Wisconsin. Chris attended several Catholic schools in his hometown, including Edgewood High School, then went on to graduate Marquette University in 1986 with a double degree in Communications and Theater. At Marquette, Farley played rugby and discovered a love of comedy.

Early Career: After college, he worked with his father at the Scotch Oil Company in Madison. While working for his father's oil company, he began learning the art of improvisational comedy at the Ark Improv Theatre in Madison, under the guidance of Dennis Kern and alongside Joan Cusack, who was attending UW Madison at the time. Farley then ventured his way to Chicago and performed at the Improv Olympic.

He then went on to work with the famed Second City Improv Company, starting the same day as Stephen Colbert, first with their touring company, and then with their main stage company by 1989. As part of the main stage company, Farley was a cast member of three revues: "The Gods Must Be Lazy," "It Was Thirty Years Ago Today," and "Flag Smoking Permitted in Lobby Only or Censorama."

SNL: Farley was one of the new "Saturday Night Live" cast members announced in early 1990, along with Chris Rock. Farley frequently collaborated with Rock, as well as fellow cast members Adam Sandler, Tim Meadows, and David Spade. This group came to be known as the "Bad Boys of SNL." Farley's popular characters included motivational speaker Matt Foley, who frequently reminded characters he was "living in a van down by the river!' The character was created by Bob Odenkirk when he and Farley worked together at Second City. The character's name came from a longtime friend of Farley's who became a Catholic priest. The mannerisms of the character were taken from Farley's days as a rugby player and coupled with his high school football coach's habit of squatting down to give pep talks.

Other famous character Farley portrayed included Todd O'Connor of Bill Swerski's Superfans, a Chippendale's dancer in a famous sketch with guest host Patrick Swayze, one of the "Gap Girls," a lunch lady, Bennett Brauer, a Weekend Update commentator, and himself on "The Chris Farley Show," which was a talk show in which Farley poorly interviewed guests or trailed off on random subjects. Many of the characters were brought to life on "SNL" from his days at Second City. Farley also performed impersonations of Tom Arnold, Andrew Giuliani, Jerry Garcia, Meat Loaf, Carnie Wilson, Rush Limbaugh, and many others.

Off-screen, Farley became well known for his pranks around the "SNL" offices. Adam Sandler and Farley would often make late night prank phone calls from the "SNL" offices in Rockefeller Center, with Sandler speaking in an old woman's voice and Farley farting into the phone. He'd also moon cars from a limousine and even once defecated out of a window. Sandler and Farley, along with many of their other castmates, were released from their contracts at "SNL" in 1995, for various reasons.

Film Career: During his time on "SNL," Farley had become a huge movie star. His film debut was when he played a security guard in "Wayne's World." In 1993, he played Ronnie the Mechanic in "Coneheads" and had an uncredited role as a bus driver in the Adam Sandler driven "Billy Madison." Around this time he also appeared in the music video for the Red Hot Chili Peppers single "Soul to Squeeze", which was a song featured on the "Coneheads" soundtrack. Farley appeared in "Airheads" in 1994. In his first two major films, "Tommy Boy" and "Black Sheep," Farley starred with "SNL" colleague and close friend David Spade. The films were a huge success at the domestic box office, earning around $32 million each, and gained a large cult following on home video.

The success of the two films cemented Farley's stance as a bankable star and he was given the starring role of "Beverly Hills Ninja" in 1996. Farley expressed dissatisfaction with "Black Sheep", an attempt by the studio to recapture the chemistry in "Tommy Boy." As a result, on the night of the premiere of "Black Sheep," Farley relapsed from his previous recovery from drug and alcohol addition, therefore requiring further rehab before he could start work on "Beverly Hills Ninja." The film was released in 1997 and Farley was nominated for an MTV Movie Award for Best Comedic Performance for his role. He completed two more films before his December 1997 death: "Almost Heroes" and "Dirty Work," released in the summer of 1998.

Unfinished Projects: Farley was originally cast as the voice of the title character in "Shrek," recording around 80-90 percent of the dialogue, but died just before recording was finished. The filmmakers felt continuing the film with Farley would be in bad taste, so Shrek's dialogue was recorded by former "SNL" castmate Mike Myers. Farley was slated for another voice role in "Dinosaur." After his death, the character was re-written as a female and was played by British actress Joan Plowright. At the time of his death, Chris had been in talks to co-star with Vince Vaugh in "The Gelfin." Jim Carrey's role in the 1996 film "The Cable Guy" was originally intended for Farley as well.

Farley was also offered the role of Ishmael, eventually played by Randy Quaid, in "Kingpin," but was forced by Paramount Pictures to turn it down in order to star in "Black Sheep." Farley was slated to appear in a third "Ghostbusters" film, and author Dav Pilkey wanted Farley to play the title role in a potential TV series based on the "Captain Underpants" books. In addition, at the time of his death, Farley had been in talks for the lead in an adaptation of the novel "A Confederacy of Dunces." He also had expressed interest in portraying Atuk in an adaptation of the novel "The Incomparable Atuk." Both of these shelved projects have been alleged to be cursed as Farley, John Belushi, and John Candy had all been tied to the projects before their untimely deaths.

Personal Life: Farley was plagued with alcohol and drug addictions for most of his adult life. In 1997, there was a visible decline in Farley's health when he made a guest appearance on Nickelodeon's "All That" as well as when he hosted "SNL" for the first time in October 1997. In the final years of his life, Farley had attempted treatment for obesity and drug abuse 17 times. On December 18, 1997, Farley was found dead by his younger brother John in his apartment in the John Hancock Center in Chicago. He was 33 years old. An autopsy revealed he had died of an overdose of cocaine and morphine, with advanced heart disease also a significant contributing factor. A private funeral was held for Farley at Our Lady Queen of Peace Catholic Church in his hometown of Madison, Wisconsin. Over 500 people attended his funeral, including many comedians who had worked with him on "SNL." His remains were interred at Resurrection Cemetery in Madison. 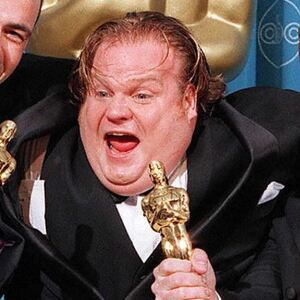