Early Life: Chris D'Elia was born Christopher William D'Elia on March 29, 1980, in Montclair, New Jersey. He grew up with mother, Ellie (an interior decorator), father Bill (a director and TV producer), and younger brother Matt, who became an actor, director, writer, and producer. Bill worked on dozens of television shows over the years and served as an executive producer on "Chicago Hope," "Boston Legal," "Ally McBeal," and "How to Get Away with Murder," to name a few. The family relocated to Los Angeles, California, when Chris was 12, and he attended La Cañada High School, graduating in 1998. As a teenager, D'Elia guest-starred on two episodes of "Chicago Hope," thanks to his father. After high school, he enrolled at New York University to study acting, but he dropped out after his freshman year.

Career: In 2000, Chris guest-starred on the Fox series "Get Real," and four years later, he appeared in the film "Almost" as well as an episode of ABC's "Boston Legal." The following year, he guest-starred on the USA series "Monk" and the NBC drama "American Dreams" and appeared in the films "Bad Girls from Valley High" and "Crazylove." D'Elia started doing stand-up comedy in 2006, and he has performed on several television shows, including "Live at Gotham" (2009), "Comedy Central Presents" (2011), and "Just for Laughs: All-Access" (2012). In 2013, Comedy Central aired the special "Chris D'Elia: White Male. Black Comic.," and Chris has also filmed three comedy specials for Netflix: "Incorrigible" (2015), "Man On Fire" (2017), and "No Pain" (2020). His father directed the first two Netflix specials, and his brother directed the third one. From 2010 to 2011, D'Elia played Bill Stankowski on the TBS series "Glory Daze," and he guest-starred on "Workaholics" in 2011 and "Sullivan & Son" in 2012. In 2011, he began playing Alex Miller on Whitney Cummings NBC sitcom "Whitney," appearing on all 38 episodes of the series.

Chris co-starred with Rashida Jones and Andy Samberg in 2012's "Celeste and Jesse Forever," and he co-hosted the "Ten Minute Podcast" with "MADtv" alums Will Sasso and Bryan Callen from 2012 to 2015. D'Elia landed a recurring role on TV Land's "Jennifer Falls" in 2014 and played the lead role of Danny Burton on NBC's "Undateable" from 2014 to 2016. In 2015, he appeared in the film "Flock of Dudes" and took part in "The Comedy Central Roast of Justin Bieber," and in 2016, he guest-starred on "Rush Hour" and "Typical Rick" and competed against "Undateable" co-star Brent Morin on "Lip Sync Battle." Chris had a recurring role on ABC's "The Good Doctor" from 2017 to 2019, and he appeared on three episodes of the Netflix series "You" as a stand-up comic/sexual predator who preys on teenage girls. The role later came to be seen as a case of art imitating life after D'Elia was accused of sexual harassment by several women. Chris has also appeared in the films "XOXO" (2016), "Half Magic" (2018), and "Life in a Year" (2020) and the television series "The Great Indoors" (2017), "Alone Together" (2018), and "Huge in France" (2019).

Personal Life: Chris married actress Emily Montague on July 29, 2006, and they divorced in 2010. In June 2020, a Twitter user going by the handle @girlpowertbh shared screenshots of messages she received from D'Elia when she was 16 years old, which led to more women coming forward with their own stories of Chris sexually harassing them and asking for nude photos when they were underage. He denied the allegations, but Comedy Central took action, removing a "Workaholics" episode in which he played a child molester from their website and various streaming platforms, and they also took his comedy special "White Male. Black Comic." off the website. D'Elia was dropped by the Creative Artists Agency, and he was replaced by Tig Notaro in the Netflix film "Army of the Dead."

In September 2020, it was reported that when actress Megan Drust agreed to give Chris a ride home from a West Hollywood restaurant in 2011, he unzipped his pants and asked Drust to touch him after getting in the car; when she refused, he allegedly began pleasuring himself. Megan got out of the vehicle and told D'Elia, "You're defiling my car." In February 2021, he addressed the allegations in a YouTube video, saying that none of his relationships had been nonconsensual but that "sex controlled [his] life." In March 2021, an anonymous woman filed a lawsuit against Chris in federal court, alleging that he sexually abused her when she was 17. The lawsuit states that D'Elia "constructed a manipulative, controlling, and abusive dynamic in which he demanded Ms. Doe provide him sexually explicit images of herself over the internet, directed her what specific sexual poses and acts she should perform for him, and psychologically punished her when she refused."

In 2017 he paid $5.4 million for a home in the mountains of Beverly Hills. The seller was actress Tricia Helfer.

In 2013 he paid $1.75 million for a home in LA's Beachwood Canyon neighborhood. The seller was TV host/comedian Craig Ferguson. Chris sold this home in 2016 for $1.9 million. 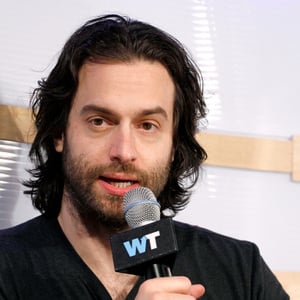