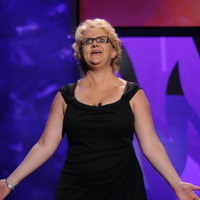 Chonda Pierce net worth: Chonda Pierce is an American Christian comedian who has a net worth of $250 thousand dollars. Pierce was born Chonda Courtney in Covington, Kentucky. She is often referred to as "The Queen of Clean" for her clean comedy. She had a troubled childhood and turned to entertainment. Pierce attended Austin Peay State University and worked for six years at Opryland USA in Nashville, Tennessee. Since she did not know how to dance she memorized jokes and did impressions. She has performed often at The Grand Ole Opry in Nashville. Pierce has written eight books. She is a very popular Christian comedian and has five Gold certified, and two Platinum comedy albums. Her comedy segments can be heard on Sirius Satellite Radio's Blue Collar Comedy and XM Radio's Laugh USA. She is a member of the Christian Comedy Association and is a spokesperson for World Vision. She has released ten comedy DVDs. Chonda has performed for the troops on USO tours. She received five Daytime Emmy nominations for co-hosting the Total Living Network talk show "Aspiring Women". She has hosted the Christian Music Hall of Fame Awards and the Inspirational Country music Awards.