Chelsea Peretti net worth and salary: Chelsea Peretti is an American stand-up comedian, actress, and writer who has a net worth of $20 million dollars. Peretti is perhaps best known for starring as Gina Linetti on the Fox series "Brooklyn Nine-Nine". She's also notable for being married to Jordan Peele. Her net worth listed on this page is mostly attributable to Jordan, who in 2019 signed a $300-400 million overall deal with Universal Pictures. Jordan was reportedly inspired by experiences with Chelsea's family in writing "Get Out", the 2017 thriller that earned $255 million at the box office and launched Jordan's career to the stratosphere.

Early Life: Chelsea Peretti was born in Oakland, California on February 20, 1978. Her mother was a schoolteacher and her father was criminal defense lawyer. Peretti has two brothers and a sister. One of her brothers is tech entrepreneur Jonah Peretti, who co-founded BuzzFeed as well as The Huffington Post. Peretti attended elementary school with future "Brooklyn Nine-Nine" co-star Andy Samberg.

Chelsea attended The College Preparatory School, located in Oakland then moved to New York City in 1996 to attend Barnard College. Peretti studied one year abroad (during her junior year) at the Royal Holloway University of London. She graduated from Barnard in 2000.

Career: While living in New York, Peretti made short films with Variety SHAC, which was a comedy troupe she formed in 2004 alongside Andrea Rosen, Shonali Bhowmik, and Heather Lawless. That same year she made first television appearance was on a show called "Comedy Lab".

Between 2008 and 2013 she appeared in 88 episodes of "The Smoking Gun Presents: World's Dumbest", as a comedic commentator.

Throughout this period she also served as a writer on various programs including "The Sarah Silverman Program", "WTF with Marc Maron" and even "Saturday Night Live" (for two episodes).

Perhaps most notably, Peretti played the part of Gina Linetti on 107 episodes of the Fox series "Brooklyn Nine-Nine". Peretti made the unexpected decision to leave Brooklyn Nine-Nine during its sixth season.

Peretti has appeared on several podcasts including "Doug Loves Movies",  "How Did This Get Made?", as well as "You Made it Weird with Pete Holmes". Peretti has also made appearances on "The Lavender Hour", "The Bone Zone with Brendon Walsh and Randy Liedtke", as well as "Comedy Bang! Bang!" In October of 2012, Peretti would launch her own podcast, a call-in show titled "Call Chelsea Peretti".

Peretti starred in director Andrea Dorfman's "anti-rom-com" "Spinster", which was released in 2019. She also provided voice work for "Sing 2".

Music: Chelsea Peretti released an EP titled "Foam and Flotsam", a musical comedy concept album. Peretti also turned in musical collaborations with Kool Kojak, songs which feature talented guests like Reggie Watts, Terry Crews, and even Juliette Lewis. The album is composed of five songs and contains deeply evocative lyrics like "How you gonna show up late but have a coffee in your hand?" not to mention prose examples like "Yeah, I wanna drink coffee with you, but I'm gonna need a soundproof bathroom". Peretti's musical offerings have been described as "whimsical yet depressive…[slamming] you into a wall and then [sliding] you up that wall and [releasing] you into a new galaxy."

Personal Life: Peretti is married to comedian/writer/director Jordan Peele. They have been dating since 2013, got engaged in 2015 and married in 2016. They welcomed their first child in 2017.

Real Estate: In 2017 Jordan and Chelsea paid $2.275 million for a home in LA's Los Feliz neighborhood. 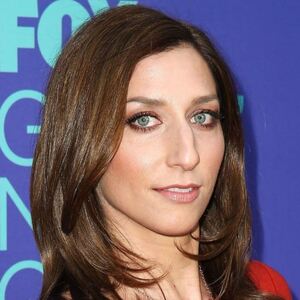