Buddy Hackett net worth: Buddy Hackett was an American comedian and actor who had a net worth of $10 million. Buddy Hackett was born in Brooklyn, New York in August 1924 and passed away in June 2003. He was best known for his starring movie roles as Marcellus Washburn in The Music Man in 1962, Benjy Benjamin in It's a Mad, Mad, Mad World in 1963, Tennessee Steinmetz in The Love Bug in 1968, and Scuttle in The Little Mermaid in 1989.

Hackett served in the United States Army during World War II and then got his first job in a Brooklyn club. In 1956 he starred as Stanley Peck in the television series Stanley. Hackett starred as Uncle Lonnie in the TV series Action from 1999 to 2000. Hackett also starred in the movies Walking My Baby Back Home, Fireman Save My Child, God's Little Acre, Everything's Ducky, The Wonderful World of the Brothers Grimm, Muscle Beach party, The Golden Head, The Love Bug, The Good Guys and the Bad Guys, Hey Babe!, Loose Shoes, Scrooged, and Paulie. In 1998 he was awarded a star on the Hollywood Walk of Fame for Live Performance at 6834 Hollywood Blvd. Buddy Hackett passed away on June 30, 2003 at the age of 78. 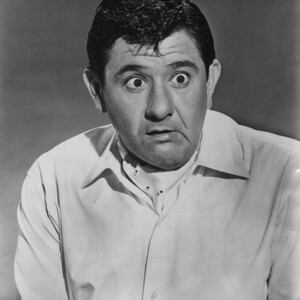