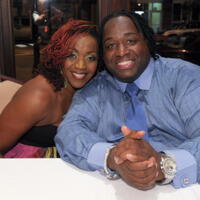 Bruce Bruce net worth: Bruce Bruce is an American actor and comic who has a net worth of $3 million. Born in Atlanta, Georgia, Bruce Bruce, also known as Bruce Church, grew up in a rough part of town, and began his comedy career performing standup while cooking barbecue at his first job out of high school. He continued to perform impromptu comedy sets while working as a salesman for Frito-Lay, and eventually found his way to the Comedy Act Theater in Atlanta. His performances there led to the chance to audition for BET's "Coast to Coast" series, and the rest is history. Since then, he has appeared as part of HBO's "Def Comedy Jam", and "Showtime at the Apollo", multiple times. He has hosted "Coming to the Stage" and "Comic View" for BET. He has been featured on "Comedy Central Presents", and has released multiple comedy DVDs of live performances. He has appeared in such films as, "Hair Show", "The Wash", "XXX: State of the Union", and "Who's Your Caddy?".