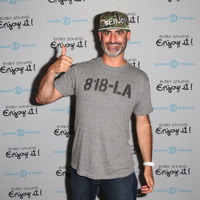 Brody Stevens net worth: Brody Stevens was an American stand-up comedian and actor who had a net worth of $500 thousand dollars at the time of his death in 2019. Brody Stevens was born in San Fernando Valley, Los Angeles, California in May 1970. He has worked as an audience warm-up comedian for the TV series The Best Damn Sports Show Period from 2001 to 2006, Chelsea Lately from 2008 to 2009, and Ridiculousness from 2012 to 2014. Stevens was a pitcher for Arizona State University. He has appeared on episodes of several TV series including Late Night with Conan O'Brien, Jimmy Kimmel Live!, The Late Late Show with Craig Kilborn, Childrens Hospital, Tosh.0, Coffee Shop Squatters, Tiny Commando, Tom Green Live, Kroll Show, Comedy Bang! Bang!, The Guest List, American Dad, and more. He starred in the TV specials Brody Stevens: Enjoy It! in 2013 and Brody Stevens: Live from the Main Room in 2017. He commonly appears late nights at the Comedy Store in Los Angeles. Tragically, Brody Stevens committed suicide on February 22, 2019.