Brian Regan Net Worth and Salary: Brian Regan is an American stand-up comedian, actor, and author who has a net worth of $7 million dollars. He is known as a "clean" comedian in that he doesn't use profanity or off-color humor in his act. Instead, he details the trials and tribulations of daily life from his favorite flavor of popsicle to shipping a package with UPS. He is an observational and sarcastic comic who uses self-deprecating humor, facial expressions, and body language to enhance his jokes and performances.

Early Life: Brian Joseph Regan was born on June 2, 1958, in Miami, Florida. He is one of eight children. His brother Dennis is also a stand-up comedian. Growing up and even into adulthood, Brian has been a fan of Steve Martin, Johnny Carson, and The Smothers Brothers. He graduated from Christopher Columbus High School in the Miami-Dade area of Florida. He went to college in Ohio at Heidelberg and planned to be an account like his father.  He was on the football team as a wide receiver in college and it was one of his coaches that saw how funny he was and encouraged him to try his hand at comedy. He blew out his knee playing football, figured out he wasn't good at accounting, became a theatre major, and decided to make the leap to comedy. He dropped out of college during his last semester in 1980 to pursue stand-up comedy.

Career: Brian went to work as a comedian straight away, gaining popularity on a tour of small, regional comedy clubs. In 1989, he appeared on the "Pat Sajak Show," doing his set. In 1991 he got to fulfill his lifetime dream of appearing on "The Tonight Show with Johnny Carson" before the legendary comedian and late-night host retired. In 1992, his comedy special "Something's Wrong with the Regan Boy," was released. Throughout the 1990s he appeared on a number of shows and comedy specials including four appearances on "An Evening at the Improv," "Short Attention Span Theatre," "Dr. Katz: Professional Therapist," and "Just for Laughs."

As his name became more recognized, he started releasing comedy specials on CD, including 1997's "Brian Regan Live." CNW writer, Amy Lamare, has been close friends with his ex-wife since the early 1990s and saw him perform his "I Walked on the Moon" show at the Irvine Improv, which was recorded and self-released by Regan in 2004 on DVD. In 2007, Regan inked a deal with Comedy Central to appear in the animated series "Shorties Watchin' Shorties."

Regan appeared on "The Late Show with David Letterman" 30 times, which is more than any other comedian. His appearances started in 1995 and concluded 20 years later in 2015.

From 2015 to 2019, Brian has made five appearances on "The Tonight Show Starring Jimmy Fallon." He's also appeared on "Late Night with Conan O'Brien"

In 2015, Regan was part of the first-ever live special on Comedy Central, "Brian Regan: Live from Radio City Music Hall." This special was released on DVD and CD in early 2016.

In 2017, Regan signed a deal with Jerry Seinfeld and Netflix to do two stand-up specials.

Personal Life: In the mid-1990s, Brian was performing his stand-up set at a small club in Las Vegas. A beautiful blonde woman sitting in the front row caught his attention. After the show, he introduced himself to her. Her name is Kathleen Bieszczat. The couple dated for a year and got engaged. They married a year later on October 15, 1997. CNW writer Amy attended their wedding.

They had two kids, a son and a daughter Brian and Kathleen divorced in 2011.

Regan was nicknamed Rip Van Winkle in college due to his propensity for sleeping at all hours of the day.

He loves Pink Floyd and has since he was young.

He is friends with Jerry Seinfeld.

He is an avid golfer.

Regan lives in Las Vegas when not on tour.

In 2016, Regan fulfilled a Make-A-Wish Foundation with for then 16-year-old Luke Granger of Lansing, Michigan. Granger wanted his favorite comedian to do a set for his birthday party. Regan agreed.

Regan does not like book dates close to his home Las Vegas because he doesn't want to be "Daddy the comedian" to his kids, he wants to just be Dad.

Real Estate: While Brian and Kathleen were married, they homeschooled their kids and the family accompanied him on his tours on his tour bus.

He owns a home in Las Vegas. 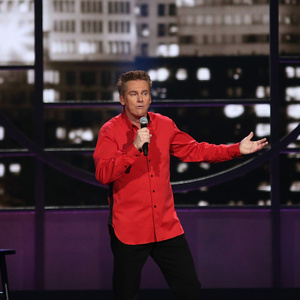