Brian Quinn net worth and salary: Brian Quinn is n American comedian, producer and actor who has a net worth of $7 million. Brian Quinn is best known for his work on the TV show Impractical Jokers, but has also worked on Class of Nuke 'Em High, and is a co-host of the popular weekly podcast, Tell 'Em Steve-Dave!

with his friends Bryan Johnson and Walt Flanagan. Quinn is a member of the New York comedy troupe, The Tenderloins, and has also toured England with a live version of the podcast Space Monkeys and What Say You?. Brian was born on March 14, 1976 and attended Brooklyn College as well as the College of Staten Island. He formed The Tenderloins with his three high school friends, (James Murray, Joe Gatto, and Sal Vulcano) in 1999, and the troupe has performed improvisation, live sketch comedy, and Long Form improv. His biggest hit, Impractical Jokers, is an American hidden camera/practical joke reality television show that premiered on True TV in 2011. It follows the four members of the comedy troupe, The Tenderloins, as they encourage one another to do public pranks that are filmed on hidden camera. While one cast-member performs the prank, the other comedians are feeding lines to their friend via an earpiece. The show has aired seven seasons and more than 166 episodes. In 2018, the Jokers completed filming a full-length featured film. 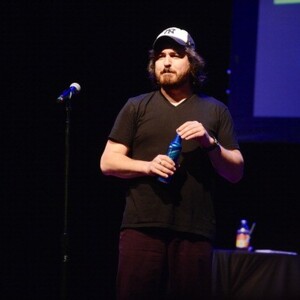