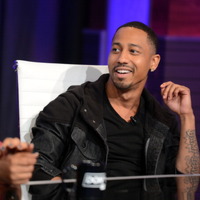 Brandon T. Jackson net worth: Brandon T. Jackson is a comic, writer, musician and actor who has a net worth of $6 million. Born in Detroit, Michigan, Brandon T. Jackson grew up in a very religious family. His mother is a pastor, and his father is a senior pastor for Great Faith Ministries International. He moved to Los Angeles to pursue a career in performance just after graduating from high school, and began performing stand-up at the Laugh Factory. His performances at the Laugh Factory led to gigs opening for Wayne Brady and Chris Tucker. He began to book on-camera work in the early 2000s, but it wasn't until 2005 that people began to take notice. His performance as Junior, in the film, "Roll Bounce", gained him new fans, and he has gone on to appear in a string of successful films, including, "Tropic Thunder", "The Day the Earth Stood Still", "Fast & Furious", "Percy Jackson & the Olympians: The Lightning Thief", and "Big Mommas: Like Father, Like Son".