Brad Sherwood net worth: Brad Sherwood is an American actor, comedian, and game show host who has a net worth of $1.5 million. Born in Chicago, Illinois on November 24, 1964, Sherwood is well known for his regular appearances in TV shows such as Whose Line is it Anyway? He attended Santa Fe Preparatory School, Santa Fe High School, and Wright State University where he majored in acting.

He began acting on L.A. Law and has hosted shows such as The Dating Game, The Big Moment, and was a guest host for Talk Soup. Sherwood's face is prominent in pop-culture talk shows, game shows, and list shows. He is currently married to Seana Mahoney. He is known for doing exceptionally accurate impersonations including those of Bob Dylan, Roger Daltrey, Mick Jagger, Bruce Springsteen, Willie Nelson, Fred Schneider, Jim Backus, Yogi Bear, Jim Stewart, and more. He has made cameos on several VH-1 series including the I Love the __'s series, 100 One Hit Wonders of the 80s, 100 Greatest Rock Ballads, I Love Toys, and Greatest Game Show Moments. He and Whose Line is it Anyway? co-star Colin Mochrie were selected and asked to perform for the United States Congress at the Congressional Radio and Television Correspondents' Association Dinner in 2007. 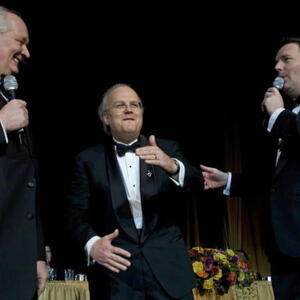