Bob Hope net worth: Bob Hope was a British-born American comedian, actor, singer, dancer, and author who had a net worth of $150 million at the time of his death. Bob Hope appeared in over 70 short and feature films across his nearly 80-year career. He also hosted the Academy Awards a record 19 times, appeared on many television shows and in theatrical productions, and authored 14 books. Additionally, Hope achieved much recognition for the 57 tours he did for the United Service Organizations, entertaining American military personnel around the world from 1941 to 1991.

Bob Hope's Wealth: At various points in his life, his net worth had been estimated to be as much as $700 million, mostly thanks to valuable real estate holdings in Southern California. In the early-80s, Forbes estimated his net worth at $200 million. When he heard about the estimate, Bob responded by saying "If my estate is worth over $50 million, I'll kiss your ass. I mean that." This sent a reporter from Forbes on a mission to evaluate his estate to prove or disprove their $200 million original estimate. In the end, that reporter adjusted the magazines estimate down to $85 million. Bob did not follow through on his promise to kiss a rear. At the time of his death in 2003, his estate was worth $115 – $150 million.

Early Life and Career Beginnings: Bob Hope was born as Leslie Townes Hope in London, England in 1903, the fifth of seven sons. His English father, William, was a stonemason, while his Welsh mother, Avis, was an opera singer. When Hope was four, the family immigrated to the United States, and settled in Cleveland, Ohio. As a kid, Hope earned money by singing, dancing, and performing comedy in public, and also took part in many amateur talent contests. Following a brief boxing career in 1919, he worked as a butcher's assistant and a lineman, and did a short stint with the Chandler Motor Car Company. When Hope decided on a career in show business, he signed up for dancing lessons along with his girlfriend. During a performance of his in 1925, Hope was noticed by silent film comedian Fatty Arbuckle, who subsequently found Hope work with a touring troupe. For his performances in the 20s, Hope gained renown as a comedian and dancer on the vaudeville circuit. In 1934, he began performing on the radio, and in 1937, had his first regular series with the "Woodbury Soap Hour" on NBC Radio.

Film Career: In the early 30s, Hope signed a contract with New York's Educational Pictures to star in six short films. Hope was not happy with the first film, "Going Spanish," and was consequently dropped by the studio. He later signed with Warner Brothers, and then moved to Hollywood and signed with Paramount Pictures. For Paramount, he starred alongside W. C. Fields in the musical "The Big Broadcast of 1938"; it was that film that featured Hope's signature song, "Thanks for the Memory."

As a star of film, Hope became best known for his hugely successful "Road" movies, in which he starred opposite Bing Crosby and Dorothy Lamour. Seven "Road" films were made between 1940 and 1962: "Road to Singapore," "Road to Zanzibar," "Road to Morocco," "Road to Utopia," "Road to Rio," "Road to Bali," and "The Road to Hong Kong," released after an 11-year hiatus. Following the end of the series, Hope starred in such films as "Critic's Choice," with Lucille Ball and Rip Torn; "Call Me Bwana," with Anita Ekberg; "Eight on the Lam," with Phyllis Diller and Jonathan Winters; "Cancel My Reservation," with Eva Marie Saint and Ralph Bellamy; and "A Masterpiece of Murder." 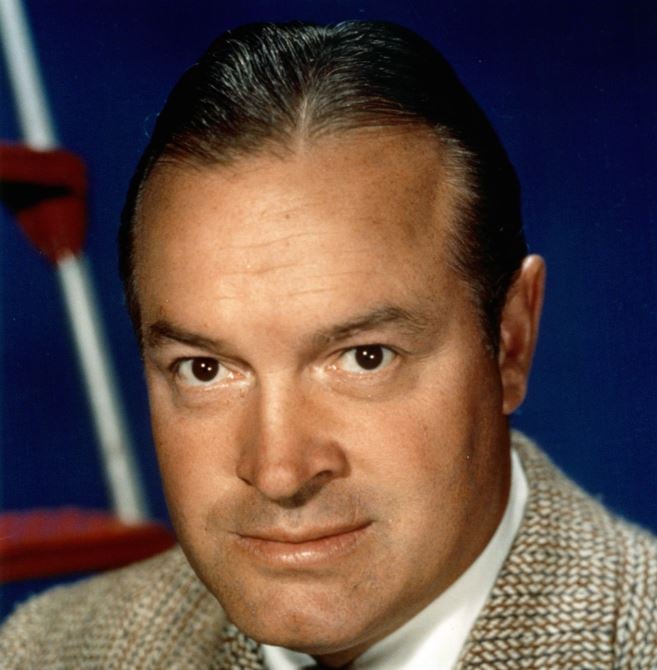 Television Career: Starting in the 50s, when radio lost its popularity to television, Hope began doing numerous specials on the NBC television network. Among his most famous contributions were his annual Christmas specials, on which he did performances of favorite songs like "Silver Bells." In 1970 and 1971, Hope's Christmas specials were filmed in Vietnam in front of military audiences; both were seen by more than 60% of all US households watching television. Additionally, from 1939 to 1977, Hope hosted the Academy Awards ceremony 19 times, more than anyone else in history.

Later on, Hope made a guest appearance on the sitcom "The Golden Girls." In 1993, he was part of his 90th birthday television celebration called "Bob Hope: The First 90 Years," which won an Emmy Award for Outstanding Variety, Music or Comedy Special. Toward the end of his career, Hope's worsening vision made it hard for him to read his cue cards. In 1996, he announced the end of his 60-year contract with NBC. Later that year, he aired his final television special, "Laughing with the Presidents," on which host Tony Danza helped him present a personal retrospective of United States presidents.

United Service Organizations: In 1941 at March Field in California, Hope performed his first USO show to American military personnel. He continued to travel around the globe to entertain troops for the remainder of World War II, and later during the Korean, Vietnam, Iran-Iraq, and Persian Gulf Wars. Over the span of half a century, he headlined 57 times at USO shows. For his service, Hope was honored with the Sylvanus Thayer Award by the United States Military Academy at West Point in 1968, becoming the first entertainer to receive that award. Later, a 1997 act of Congress signed by President Bill Clinton named Hope an Honorary Veteran.

Theatrical Career: On stage, Hope made his first Broadway appearances in 1927 and 1928, taking minor walk-on roles in "The Sidewalks of New York" and "Ups-a-Daisy." He returned to Broadway in 1933 to star in a much bigger part, playing Huckleberry Haines in the musical "Roberta." This was followed by roles in the musicals "Say When," the 1936 "Ziegfeld Follies," and "Red, Hot and Blue," costarring Ethel Merman and Jimmy Durante. Later, in a 1958 production of "Roberta" in St. Louis, Missouri, Hope reprised his role as Huckleberry Haines.

Personal Life: In 1933, Hope married his first wife, Grace Louise Troxell, who was his vaudeville partner; they divorced only a year later. He subsequently met and began a relationship with performer Dolores Reade, although whether or not the two ever married remains a point of much debate. Together, Hope and Reade adopted four children: Linda, Tony, Kelly, and Eleanora. The couple lived in Manhattan in 1935, and from 1937 until Hope's passing, resided at 10346 Moorpark Street in Toluca Lake, California. He also owned a 23,366-square-foot mansion in Palm Springs.

Hope stayed in relatively good health throughout his old age. However, in 2000 at the age of 97, he was hospitalized for gastrointestinal bleeding. The next year, he spent around two weeks in the hospital with pneumonia. In 2003, at the age of 100, he passed away from pneumonia complications at his home. Later, his remains were interred at the newly constructed Bob Hope Memorial Garden at the San Fernando Mission Cemetery. 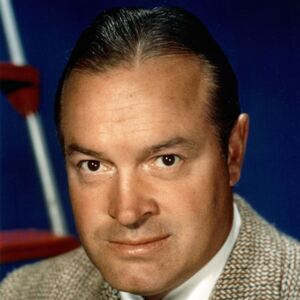