How much is Barry Humphries Worth?

Barry Humphries net worth: Barry Humphries is an Australian comedian, satirist, Dadaist, artist, author and character actor who has a net worth of $12 million. Barry Humphries has earned his net worth from the on-stage and television alter egos Dame Edna Everage. Dame Edna is a fictional Melbourne housewife and a "gigastar". Barry also plays the character Sir Les Patterson, a foul-mouthed cultural attaché to the Court of St. James. Humphries is a film producer and script writer, as well as a star at the London West End musical theatre. In 2010 Anne Pender described Humphries as the most significant theatrical figure of our time, and the most significant comedian to emerge since Charlie Chaplin. Barry was born on February 17, 1934, and raised in the suburb of Camberwell, Melbourne, Victoria, Australia. He has been married four times and is currently married to Lizzie Spender. He has five children. Some of Humphries notable friends include Australian painter Arthur Boyd, author and former politician Jeffery Archer, and Irish comedian Spike Milligan. Humphries is the author of several books including two autobiographies, two novels and a treatise on Chinese drama in the goldfields. He is the author of many plays as well as dozens of recordings. The J. R. Ackerley Prize for autobiography in 1993 was won by Barry Humphries. 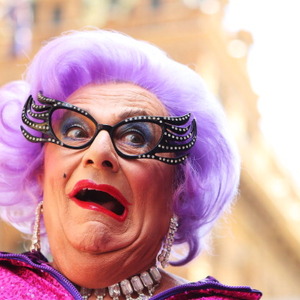