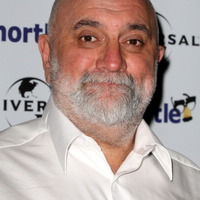 Alexei Sayle net worth: Alexei Sayle is an English stand-up comedian, actor, and author who has a net worth of $6 million. Alexei Sayle was born in Anfield, Liverpool, England in August 1952. He was a central member of the 1980s alternative comedy movement. Sayle starred on the television series The Young Ones from 1982 to 1984. In 2011 he narrated the TV series Olive the Ostrich. Sayle has starred in several films including The Secret Policeman's Other Ball, Gorky Park, The Bride, The Supergrass, Whoops Apocalypse, Solarbabies, Siesta, Indiana Jones and the Last Crusade, Carry On Columbus, Reckless Kelly, Arabian Nights, and more. He released the albums Cak! in 1982, The Fish People Tapes in 1984, and Panic in 1985. He has also authored the books Train to Hell, Geoffrey The Tube Train And The Fat Comedian, Alexei Sayle's Great Bus Journeys Of The World, Barcelona Plates, The Dog Catcher, Overtaken, The Weeping Women Hotel, Mister Roberts, Stalin Ate My Homework, and Thatcher Stole My Trousers.