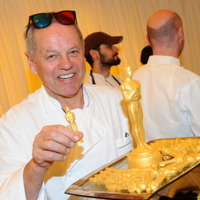 What is Wolfgang Puck's Net Worth?

Wolfgang Puck is an Austrian celebrity chef and restaurateur who has a net worth of $120 million. An internationally famous chef, restaurateur, businessman, author, and actor, Puck oversees a vast cooking empire that includes books, more than 20 restaurants, celebrity catering services (including the Academy Awards), and various packaged foods and cooking-related products. Wolfgang has turned from a curious boy learning how to cook from his part-time pastry chef mother into a true celebrity chef to rival all others.

Wolfgang Puck did that thing about which many chefs dream.  He created a culinary empire. The Austrian-born chef began cooking when he was a child, helping his mother out in the kitchen.  As a young adult, he moved to France to train as an apprentice under Raymond Thuilier at L'Oustau de Baumanière in Les Baux-de-Provence.  He then moved on to the Hotel de Paris in Monaco, and Maxim's Paris.  He moved again in the early 70's, settling in the US. He began his US culinary career at La Tour in Indianapolis, Indiana, and then moved on to Ma Maison in Los Angeles.  At Ma Maison, he began to build a widespread reputation for excellence, and the 1981 publication of his cookbook, "Modern French Cooking for the American Kitchen" catapulted him to national fame.  A year later, he opened his first Spago on the Sunset Strip.  From there, he went on to open a second location, and then launched the Wolfgang Puck Companies.  The various entities under this umbrella include the Wolfgang Puck Fine Dining Group, Wolfgang Puck Worldwide, Inc. and Wolfgang Puck Catering. He controls a vast empire of successful restaurants, catering companies, cookbooks, kitchen implements, and packaged foods.  He has won a dizzying array of culinary honors, and is the official caterer for the Oscars.  He has appeared on talk shows, television series, and on various reality competition shows.  He also had his own show on The Food Network. As of today, his fine dining restaurants, catering locations, and numerous licensed products are all run by Wolfgang Puck Companies.

Wolfgang Puck was born Wolfgang Johannes Topfschnig on July 8, 1949, in Sankt Veit an der Glan, Austria. His mother, Maria, was a pastry chef, and after Wolfgang's parents divorced, he was adopted by his stepfather, Josef Puck. Puck grew up with two half-sisters and a half-brother, and after his mother taught him how to cook, he began formally training to be a chef at age 14. Wolfgang was an apprentice under Raymond Thuilier at L'Oustau de Baumanière, Hôtel de Paris, and Maxim's Paris. In 1973, Puck relocated to the United States and spent two years at Indianapolis restaurant La Tour. He then decided to move to Los Angeles, becoming chef and part-owner of Ma Maison restaurant, which is credited for starting the "California cuisine" trend.

In 1981, Wolfgang published his first cookbook, "Modern French Cooking for the American Kitchen," and the following year, he opened Spago in West Hollywood, then moved it to Beverly Hills in 1997. In 1983, Puck opened Chinois in Santa Monica, and then he opened Postrio in San Francisco in 1989 and Granita in Malibu in 1991. Wolfgang opened his first Las Vegas restaurant in 1992, beginning with Spago at Caesars Palace; he followed it with Postrio Bar & Grill (The Venetian) and Trattoria del Lupo (Mandalay Bay Resort and Casino) in 1999, Wolfgang Puck Bar & Grill (MGM Grand) in 2004, CUT (The Palazzo) in 2008, and Cucina by Wolfgang Puck (The Shops at Crystals) in 2010. He opened CUT in the Beverly Wilshire in 2006, and after its first year in business, "Esquire" magazine named it Restaurant of the Year. Since 2001, Puck has been opening restaurants all over the U.S., including Atlantic City's Wolfgang Puck American Grille, Detroit's Wolfgang Puck Pizzeria & Cucina, and Washington, D.C.'s The Source, and he went international in 2010 with CUT in Singapore. Wolfgang has opened several Spago locations, including one at The St. Regis Istanbul.

Wolfgang has formed Wolfgang Puck Companies, which includes three different divisions: Wolfgang Puck Worldwide, Inc., Wolfgang Puck Fine Dining Group, and Wolfgang Puck Catering. In 2003, Tribune Content Agency began syndicating his recipes, making them available in newspapers and websites. Puck has published seven cookbooks, including "Adventures in the Kitchen with Wolfgang Puck"(1991), "Pizza, Pasta, and More" (2000), "Live, Love, Eat" (2002), and "Wolfgang Puck Makes It Healthy" (2014). In addition to catering the Academy Awards Governors Ball, Wolfgang has also been involved in the entertainment industry as an actor and cooking show host. He has guest-starred as himself on the television series "Tales from the Crypt" (1992), "Frasier" (2000;2002), and "Las Vegas" (2003; 2006), and he had his own show, "Wolfgang Puck," on the Food Network in the early 2000s. He launched the Wolfgang Puck Cooking School in 2016, and he has a line of housewares that includes cookware, panini grills, blenders, and cutlery. Puck has also released several consumer products, such as Estate Grown Organic Coffees and Wolfgang's All-Natural and Organic Soups. 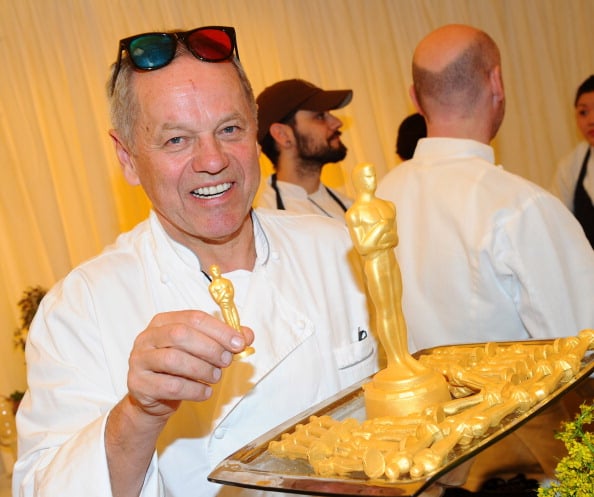 Wolfgang married Marie France Trouillot on July 5, 1975, and they divorced in 1980. He wed Barbara Lazaroff on September 1, 1983, and they had sons Cameron and Byron before divorcing in 2003. Lazaroff was involved in the interior design of Puck's restaurants, and she co-founded the Wolfgang Puck Brand. On July 7, 2007, Wolfgang married designer Gelila Assefa, and they have two sons together, Alexander and Oliver. Puck is passionate about philanthropy, and in 1982, he co-founded the Puck-Lazaroff Charitable Foundation. The foundation puts on the annual American Wine & Food Festival, which benefits Los Angeles Meals-on-Wheels programs.

Puck won the James Beard Foundation Award for Outstanding Chef of the Year in 1991 and 1998. In 1993, the "Nation's Restaurant News" inducted Spago Hollywood into the Fine Dining Hall of Fame, and the restaurant was honored with the James Beard Restaurant of the Year Award in 1994. In 2005, Spago Beverly Hills won a James Beard Foundation Outstanding Service Award, and the Los Angeles "Michelin Guide" awarded it two Michelin stars in 2008 and 2009. CUT Beverly Hills and CUT at the Marina Bay Sands, Singapore were awarded a Michelin star in 2007 and 2016, respectively. Wolfgang was inducted into the Culinary Hall of Fame in 2013, and the International Foodservice Manufacturers Association named him their Gold Plate Winner in 2017. Puck won a Daytime Emmy Award for Outstanding Service Show for "Wolfgang Puck" in 2002, and he received a star on the Hollywood Walk of Fame in 2017.