Tyler Florence Net Worth: Tyler Florence is a chef and television host who has a net worth of $15 million. Tyler Florence was born March 3, 1971 in Greenville, South Carolina. He has been the host of several Food Network shows. Florence graduated from the College of Culinary Arts at the Charleston, South Carolina campus of Johnson & Wales University in 1991.

He was later given an honorary doctorate from the university for his culinary success. In July 2008, Tyler opened his first kitchen retail shop, The Tyler Florence Shop, in Mill Valley, California. Outposts would soon open at San Francisco International Airport and in Napa, California. Tyler Florence opened a new restaurant concept, Tyler Florence Rotisserie & Wine, adjacent to the Napa shop. Tyler also released two best-selling cookbooks in 2008: Stirring the Pot and Dinner at My Place (Meredith Books). He also has three previously released books: Tyler's Ultimate, Eat This Book and Real Kitchen (Clarkson Potter). In January 2009, Tyler launched his signature lines of steel-clad cookware and titanium cutlery on Home Shopping Network (HSN) and at major retailers across the United States, including Macy's, where Tyler is a member of the prestigious Macy's Culinary Council. Also in 2009, Tyler opened his first signature restaurant, The Empire Plush Room, at the new Hotel Vertigo in San Francisco. In June 2010, Tyler opened another signature restaurant, Wayfare Tavern, in San Francisco's Financial District and later opened the historic El Paseo in Mill Valley in fall 2010. Tyler lives in Mill Valley, California with his wife, Tolan, and their three children, sons Miles and Hayden, and daughter Dorothy. 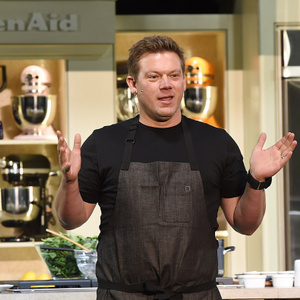