Tom Colicchio net worth: Tom Colicchio is an American celebrity chef who has a net worth of $20 million. Tom Colicchio is most famous for being the founder of Craft and Colicchio & Sons restaurants, as well as a head judge on Bravo's Top Chef television show. Tom was also the featured Chef on Great Chefs, and is the co-founder/former executive chef of Gramercy Tavern.

Thomas Patrick Colicchio was born in Elizabeth, New Jersey in August 1962. He is of Italian descent. In 1994 he opened Gramercy Tavern in Manhattan, NY with his partner Danny Meyer. In 2003 and 2005 the Tavern was voted Most Popular Restaurant in New York City by the Zagat Survey. In 2006 Colicchio sold his interested in the business. In 2001 he opened the Craft restaurant a block south of Gramercy Tavern. In 2002 he opened Craftsteak at the MGM Grand in Las Vegas and in 2003 he started a sandwich shop called 'wichcraft. He opened Colicchio & Sons and Riverpark in 2010. He is known for being the head judge on the reality series Top Chef on Bravo since 2006. He is also a main consulting producer for Top Chef Masters. He performed the Heimlich maneuver on cookbook author Joan Nathan at the 2009 U.S. presidential inaugural event. Colicchio has won five James Beard Foundational Medals and an Emmy Award. He has also written three cookbooks. He has been accused of sexism on Top Chef. Tom married Lori Silverbush in 2001 and has three children. 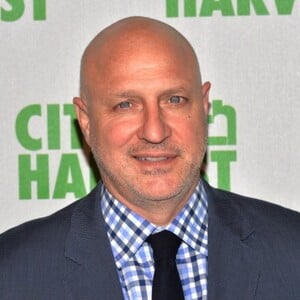