Todd English net worth: Todd English is a restaurateur, master chef, television host, and author who has a net worth of $20 million. Todd English has earned his net worth through his ownership of three Italian restaurants called "Olives" in New York, Las Vegas and Boston. He also owns several other well known restaurants all over the country as well as on the luxury cruise ships, Queen Victoria and the RMS Queen Mary II. Todd English owns Pizzerias called "Figs" in Beacon Hill and Charlestown in the Boston area. The four cookbooks that English has authored and co-authored are titled "Cooking in Everyday English," The Olives Table," "The Figs Table" and "The Olives Dessert Table." He has appeared on PBS with his own cooking show "Food Trip with Todd English," and as judge on the "Cooking Under Fire Show" also on PBS. English was born in Amarillo, Texas in 1960. His family then moved to Sandy Springs, Georgia and then to Bradford Connecticut. He attended Guilford College in North Carolina for a while, but dropped out to attend the Culinary Institute of America where he graduated in 1982. After graduating he worked in New York at the La Cote Basque and then moved to Italy and worked in many of their restaurants as well, before returning to Cambridge Massachusetts and becoming the Executive Chef at Michela's Italian Restaurant. While attending the Culinary Institute of America, he met and later married Olivia Disch, whom he named his first restaurant (Olives) after. They have three children Oliver, Simon and Isabelle. The couple are now divorced. English is also working for Delta Air Lines as the head chef. 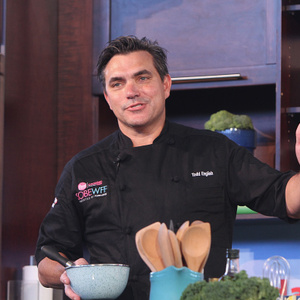