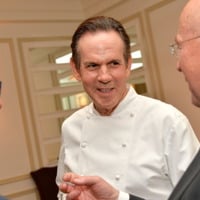 Thomas Keller Net Worth: Thomas Keller is an American chef, restaurateur and cookbook author who has a net worth of $50 million. Thomas is best-known for owning the high-end restaurants The French Laundry, Per Se, Bouchon Bistro and Ad Hoc.

Thomas Keller was born October 14, 1955 in Camp Pendleton, Oceanside, California. He is as renowned for his culinary skills as he is for his ability to establish a restaurant that is relaxed yet exciting. Keller began his culinary career at a young age, working in a Palm Beach restaurant managed by his mother. He relocated to France in 1983, where he worked in several Michelin-starred restaurants. He opened his first restaurant, Rakel, in New York City in 1986 then moved westward to California to work as the executive chef at the Checkers Hotel in Los Angeles. In 1994, Keller opened the French Laundry in Yountville, which quickly became a destination restaurant.

His French bistro Bouchon debuted down the street in 1998, with Bouchon Bakery following five years later. Keller now has eight restaurants and two bakeries in the U.S. His personal standards are exceptionally high and he values genuine collaboration. He has successfully assembled an expert staff that shares his philosophy and vision, enabling him to concentrate on his many varied interests. He is the author of the award-winning The French Laundry and Bouchon cookbooks, as well as Under Pressure (a cookbook on sous-vide cooking). In November 2009, he released his fourth cookbook, Ad Hoc at Home, featuring family-style recipes. It has been nominated for the IACP and James Beard awards and appeared on the New York Times Best-Sellers lists for six weeks. Keller collaborated with Raynaud and the design firm Level on a collection of white porcelain dinnerware called Hommage.

Keller's awards and accolades are many. In 2001, he was named America's Best Chef by Time magazine; in 2003, Johnson and Wales University conferred him with the honorary Degree of Doctor of Culinary Arts; he won consecutive Best Chef awards from the James Beard Foundation and Chef of the Year from The Culinary Institute of America. Additionally, he is the only American-born chef to hold multiple three star ratings by the Michelin Guide.