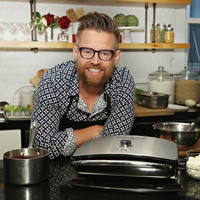 Richard Blais Net Worth: Richard Blais is an American chef, restaurateur, author, and television personality who has a net worth of $5 million. Blais was born in Uniondale, New York in February 1972. He received his degree in culinary arts from The Culinary Institute of America. Richard studied under chefs Daniel Boulud, Ferran Adria, and Thomas Kellar. He opened his first restaurant, BLAIS in 2001. Blais' company TrailBlais is a partner in FLIP Burger Boutique. He has endorses companies such as Diageo and Garrett Popcorn. He opened The Spence in 2012 in partnership with Concentrics Hospitality. Blais was a contestant on the fourth season of the reality show Top Chef on the Bravo network. He was the runner-up to winner Stephanie Izard. He appeared on Top Chef Masters and assisted winner Rick Bayless. Blais competed in Top Chef: All-Stars in 2010 and won the competition. Richard Blais was also featured on the 2012 show Life After Top Chef. In 2010 Richard hosted the Science Channel series Blais Off. His newest restaurant Juniper & Ivy opened in San Diego, California in 2014. He released a book in 2013 and ran the New York City marathon in 2011. He also hosts the TASTED YouTube show BurgerLab.