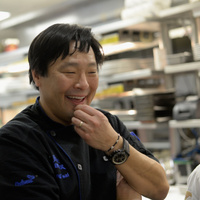 Ming Tsai net worth: Ming Tsai is an American restaurateur, television personality, and celebrity chef who has a net worth of $10 million. Ming Tsai was born in Newport Beach, California in March 1964. He studied at Le Cordon Bleu, Cornell University, and Yale University. He is best known for hosting the television series Simply Ming from 2004 to 2013. He also served as executive producer of the series from 2011 to 2012. He has also appeared in episodes of the TV series The Tony Danza Show, The Late Late Show with Craig Ferguson, The Best Thing I Ever Ate, and The Chew. Tsai won a Daytime Emmy Award in 1999 for Outstanding Service Show Host for East Meets West with Ming Tsai. He was also nominated for two Daytime Emmy Awards in 2009 for Simply Ming. Tsai was a contestant on the third season of the Food Network reality TV series The Next Iron Chef. He is a member of the Culinary Hall of Fame.