How much is Michael Symon Worth?

Michael Symon net worth: Michael Symon is an American chef, restaurateur, television personality, and author who has a net worth of $6 million. He is known for hosting or co-hosting a variety of shows on The Food Network. Most notably he hosted "The Chew" from 2011 to 2018.

Michael Symon was born in Cleveland, Ohio in September 1969. He owns restaurants in the Cleveland, Ohio area including Lola, The B Spot, and Lolita. He has been credited with helping to save the Downtown Cleveland restaurant scene. Symon graduated from the Culinary Institute of America. He has appeared on many TV series including Iron Chef America, The Best Thing I Ever Ate, Food Feuds, and Cook Like an Iron Chef. Symon has written for publications including Bon Appetit, Gourmet, Esquire, and O, The Oprah Magazine. Symon has authored cookbooks including Michael Symon's Live to Cook: Recipes and Techniques to Rock Your Kitchen, The Chew: Food. Life. Fun., Michael Symon's Carnivore: 120 Recipes for Meat Lovers, and The Chew: What's for Dinner. Symon won a Daytime Emmy Award for Outstanding Informative Talk Show Host for The Chew in 2015. 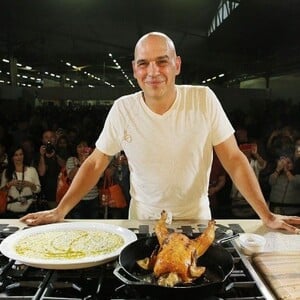