Food & Wine Magazine named Chiarello Chef of the Year in 1985. He moved back to California and became a chef at The Heritage Restaurant. The restaurant failed and went bankrupt, but the opened the Tra Vigne restaurant. He has served as an executive chef in restaurants in San Francisco, Aspen, and Scottsdale. In 2001 his show Season by Season debuted on PBS. He also hosted Michael Chiarello's Napa and Michael Chiarello's Napa: Casual Cooking on PBS. He moved to the Food Network in 2003 to host Easy Entertaining. His show NapaStyle debuted on the Fine Living Network in 2004. He was a contestant on Top Chef Masters and finished second. In 2003 he married wife Eileen and the couple has one son, in addition to his three daughters from a previous marriage. Chiarello has authored seven cookbooks. 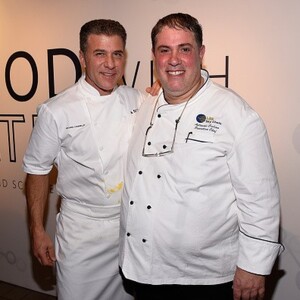