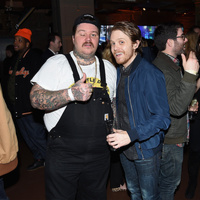 Matty Matheson net worth: Matty Matheson is a Canadian chef who has a net worth of $2 million. Matty Matheson was born in New Brunswick, Canada. Matheson studied at Humber College where he completed his chef training and culinary management. After he graduated Matheson took a job at Le Select Bistro and became junior sous chef after three years. In 2007 he left to work at La Palette in Kensington Market. Matheson joined Oddfellows and partnered with the new venture Parts and Labour in Toronto, Canada. He is currently the executive chef at Parts and Labour. In 2011 he co-founded the Group of 7 Chefs in Toronto and in 2012 he started P&L Catering. He is also responsible for the Northern Alliance which brings chefs together from the U.S. and Canada. Matty is very popular on social media. He has been featured in many YouTube series and personally has more than 340,000 followers on Instagram.