Marco Pierre White Net Worth: Marco Pierre White is a British celebrity chef, restaurateur and television personality who has a net worth of $40 million. Marco Pierre White was born December 11, 1961 in Leeds, United Kingdom. Marco Pierre White comes from a long line of chefs; his father, grandfather and brothers were all chefs. Marco began his cooking career as a kitchen apprentice at the Hotel St. George in Harrogate and quickly worked his way up to a job at the two Michelin-starred Box Tree in Ilkley, Yorkshire, where he fueled his obsession with food. Following this stint, Marco moved to London and found a job working at Le Gavroche and began his classical training as a commis (a basic chef). He then worked at Le Manoir aux Quat'Saisons in Oxfordshire, under Raymond Blanc. In 1986—at only 24 years of age—he became a shareholder and head chef at upmarket burger bar Harveys. Marco transformed it into a classy and sophisticated restaurant. At the same time, Marco transformed into a chef known to be ruthless. He has been dubbed by the press as 'London's rudest chef'. During his early career in the kitchen, White regularly ejected patrons from his restaurants if he took offense at their comments. When a customer once asked if he could have a side order of chips with his lunch, White hand-cut and personally cooked the chips, but charged the customer extra for his time. A young chef at Harveys, who once complained of heat in the kitchen, had the back of his chef's jacket and trousers cut open by White—wielding a sharp paring knife. Marco's tough attitude was not for nothing though—he received his third Michelin star at the age of 33. He is the youngest Briton to have received 3 Michelin stars. He also raised eyebrows when, after 17 years of pursuing what he thought to be his ambition (and in spite of his accomplishments), he returned his Michelin stars and retired, citing that his career did not provide him with adequate returns in his personal life. 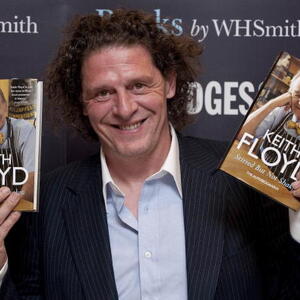