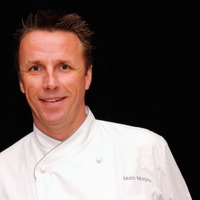 Marc Murphy net worth: Marc Murphy is a European executive chef, restauranteur, and television personality who has a net worth of $8 million. Marc Murphy graduated from Fryeburg Academy and The Institute of Culinary Education and started out as a line cook in New York. He later became a sous-chef before becoming the executive chef at Cellar in the Sky in New York in 1996. Murphy was the co-owner and executive chef of La Fourchette from 1997 to 2000. In 2000 he became executive chef of Chinoiserie and partner and co-owner of Le Couteau. Murphy opened his first solo enterprise in 2004 and went on to open several more. He has been featured as a judge on The Food Network reality TV series Chopped and has appeared on other TV series including Iron Chef America, The Best Thing I Ever Ate, The Today Show, and The Rachael Ray Show. His first cookbook Season with Authority: Confident Home Cooking was released in 2015.