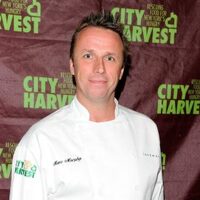 Marc Murphy net worth: Marc Murphy is an Italian American executive chef, restauranteur, and television personality who has a net worth of $6 million. Marc Murphy was born in Milan, Italy in 1969. After attending the Institute of Culinary Education he became a line cook at Prix Fixe in New York. Murphy became a sous-chef at Layla before becoming executive chef at Cellar in the Sky in 1996. He served as co-owner and executive chef at La Fourchette from 1997 to 2000 and then became executive chef at Chinoiserie and co-owner of Le Couteau. Murphy opened his first solo restaurant in 2004 called Landmarc Tribeca. He opened Ditch Plains in 2006 and another Landmarc in 2007. Murphy opened Kingside in 2013 and Grey Salt in 2015. He is best known for being a judge on the reality TV series Chopped since 2009 and Chopped Junior since 2015. Murphy has also appeared on episodes of the TV series Rachael Ray, Guy's Grocery Games, and more.