Lidia Bastianich Net Worth: Lidia Bastianich is an American chef, restaurateur, and author who has a net worth of $16 million. Bastianich has earned her net worth as a chef who specializes in Italian cuisine. She has been a regular on cooking shows since the late 1990s, and she has hosted several of her own shows, such as "Lidia's Italy" (2007-2010), "Lidia Celebrates America" (2011-2018), and "Lidia's Kitchen" (2013-2020). Lidia owns several Italian restaurants across the U.S., including Manhattan's Becco and Del Posto, and her children, Tanya and Joe, are her business partners. Bastianich has written several cookbooks, including "Lidia's Italian-American Kitchen" (2001), "Lidia's Family Table" (2004), and "Lidia's Commonsense Italian Cooking: 150 Delicious and Simple Recipes Anyone Can Master" (2013), and she published her memoir, "My American Dream: A Life of Love, Family, and Food," in 2018.

Early Life: Lidia Bastianich was born Lidia Giuliana Matticchio on February 21, 1947, in Pula, Pola, Italy, a few months before the town became Istria County, Croatia. Lidia grew up in the Socialist Federal Republic of Yugoslavia (where the family's last name was changed to Motika), with mother Erminia, father Vittorio, and brother Franco, and in 1956, Lidia and Franco escaped to Trieste, Italy, with their mother. Vittorio soon joined the rest of his family after crossing the border at night, and the family temporarily lived with Lidia's aunt, Nina, who was a chef. The family then lived at Risiera di San Sabba, a refugee camp in Trieste. After two years, the Motika family's displaced persons application was approved, and they emigrated to the United States. The family began living in North Bergen, New Jersey, in 1958, and later moved to Queens, New York. As a teenager, Lidia worked part-time at a bakery owned by the father of actor Christopher Walken.

Career: Lidia and her husband, Felice, opened the Queens restaurant Buonavia in 1971, and Lidia served as the hostess, then began training to be the assistant chef the following year. They opened another Queens restaurant, Secondo, and Bastianich was known for giving live cooking demonstrations there. After Lidia's father died in 1981, the Bastianiches sold Buonavia and Secondo and bought a brownstone in Manhattan that already had a restaurant in it. After $750,000 in renovations, the new restaurant was ready, and Felidia went on to earn Lidia several "Best Chef in New York" nominations from the James Beard Foundation. In 1993, Lidia and Felice's son, Joe, asked them to open a restaurant, Becco, with him in the Theater District. The new restaurant was a success, and the Bastianiches began expanding to other states, beginning with Lidia's Kansas City in 1998.

By the end of the 1990s, Joe had become the restaurant group's chief sommelier, and in 2010, Lidia, Joe, and Oscar Farinetti opened the Italian marketplace Eataly in Manhattan, with Bastianich teaching culinary and gastronomy classes at La Scuola, Eataly's school. They opened a second Manhattan location in 2016 and have also opened Eataly locations in Chicago, Boston, Los Angeles, and Las Vegas. In 2010, Lidia released a line of cookware, Lidia's Kitchen, with QVC, and she launched Nonna Foods with her daughter, Tanya, selling several varieties of pasta and sauces under the brand.

Philanthropy: Lidia is a member of the non-profit organizations Women Chefs and Restaurateurs and Les Dames d'Escoffier, and she is a supporter of the United Nations Association of the United States of America's Adopt-A-Future program. Bastianich also supports BoysGrow and the United Nations Development Fund for Women and has hosted benefit dinners for both organizations. Lidia is a member of the National Organization of Italian American Women's Distinguished Board and has been involved with the Italian American Committee on Education as well.

Personal Life: Lidia met Felice "Felix" Bastianich at her 16th birthday party, and they married in 1966. The couple welcomed son Joseph in 1968 in daughter Tanya in 1972. In 1998, Lidia and Felice divorced, and he transferred his shares in their business to Joe and Tanya; Felice passed away in 2010. In 2011, Maria Carmela Farina sued Lidia for $5 million, alleging that the chef convinced her to move from Italy to America by promising her a $600-a-week job in which she would help manage Bastianich's restaurants and TV projects. Instead of the promised work, Farina spent six years taking care of Lidia's elderly neighbor without pay. The lawsuit was tossed out in 2012 because Bastianich had given Farina health insurance as well as room and board, but a Manhattan appeals court reinstated the lawsuit in 2014, ruling that Farina should've been paid for her services.

Awards and Accolades: Lidia received the Woman of the Year/Innovation Award, Restaurant Category from the Women's Institute of the Center for Food and Hotel Management in 1987 and the "Who's Who of Food & Beverage in America" James Beard Award in 1996. The James Beard Foundation also named her "Best Chef in New York" in 1999, "Best Outstanding Chef" in 2002, and they named "Lidia's Italy" Best Cooking Show in 2009 and "Lidia Celebrates America: Home for the Holidays," "Lidia Celebrates America: Holiday for Heroes," and "Lidia Celebrates America: Homegrown Heroes" Best Special in 2016, 2017, and 2018, respectively. Bastianich won Daytime Emmys for Outstanding Culinary Host in 2013 and 2018, and she has earned three Taste Awards, with "Lidia Celebrates America" winning the Pioneer Award in 2012 and 2016 and the Best Food Program Television award in 2017. She has also received the Sandretto Re Rebaudengo Foundation's StellaRe Prize (2017), the Culinary Institute of America's Master of the Aesthetics of Gastronomy Award (2019), and the Scientific Committee of Casa Artusi's Premio Artusi (2019), and Senator George Onorato named her "The First Lady of Italian Cuisine and Restaurants in the United States" in 2002.

Real Estate: Lidia has been living in a 3,624 square foot home in the Douglaston neighborhood of Queens, New York, for more than 30 years. Her widowed mother lives with her, and Bastianich grows many herbs and vegetables on the property. It should be no surprise that the home includes a large kitchen, and Lidia filmed some of her early TV shows in the nearly 500 square foot space. 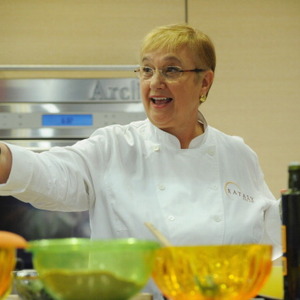